Top Off Tuesday: Once Burned


I have been enjoying this meme on Felicia's The Geeky Blogger's blog and have finally found some time to join in. The other players are Amanda from On a Book Bender, Christi from Smitten with Reading. Button made by Missie at The Unread Reader 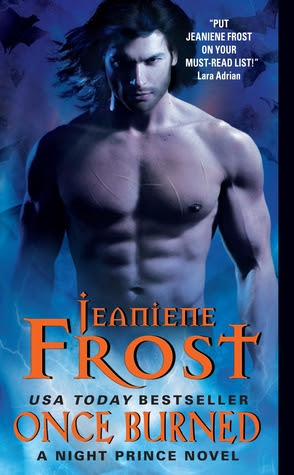 She's a mortal with dark powers...

After a tragic accident scarred her body and destroyed her dreams, Leila never imagined that the worst was still to come: terrifying powers that let her channel electricity and learn a person's darkest secrets through a single touch. Leila is doomed to a life of solitude...until creatures of the night kidnap her, forcing her to reach out with a telepathic distress call to the world's most infamous vampire...

He's the Prince of Night...

Vlad Tepesh inspired the greatest vampire legend of all—but whatever you do, don't call him Dracula. Vlad's ability to control fire makes him one of the most feared vampires in existence, but his enemies have found a new weapon against him—a beautiful mortal with powers to match his own. When Vlad and Leila meet, however, passion ignites between them, threatening to consume them both. It will take everything that they are to stop an enemy intent on bringing them down in flames.

Okay, I've had one of Jeaniene's novellas on the list, but not one from the Night Huntress world. How could I? Well, I'm correcting it now. Behold! Vlad in all his shirtless goodness. :D
Posted by Melissa (Books and Things) at 12:00 AM