Awaken the Darkness by Dianne Duvall 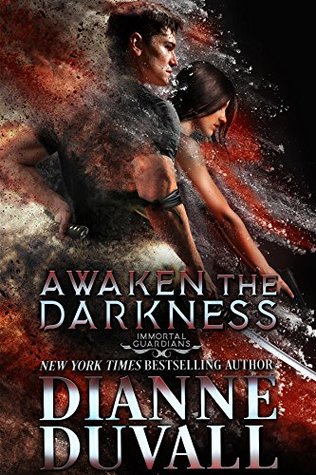 This is a fun PNR/UF that I have enjoyed since the first book. If you haven't read them, you are missing out on some laughs, adventure and romance. I do suggest starting with the first book in the series to really get to know all the characters and it also helps to make sense of the overall series arc.

In this book we go a bit back in time to an incident that hurt the guardians. This is Stanislav's story and what happened to him during the incident and 2 years later. Stan is a man of honor and it shows throughout his story even when he manipulates to survive. He finds his equal and while she doesn't have his strength, she is no wilting flower. I liked how these two worked together and it was easy to believe the romance. I loved also how both waited until he was healed to further their relationship. My only complaint would be that I would have liked a reunion scene with Jax (you'll see who that is. when you read it... LOL) but I still really loved the epilogue which made it a perfect end to the story. Still, I wouldn't have minded a few hundred more pages... but then I always want more of a story I'm enjoying.

I give this book 4 1/2 stars. It had been too long since I was back in this world and every time I visit I enjoy myself. If you are looking for a humorous romance with some kick ass adventure, I do suggest this whole series.

There is a few more days to enter for the prize pack! Just go HERE for the post and how to enter.