A weekly meme On My Wishlist from Book Chick City 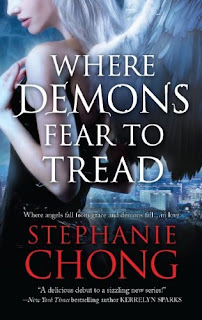 Fledging guardian angel and yoga teacher Serena St. Clair dares to enter Devil’s Paradise nightclub on a mission—to retrieve the wayward Hollywood “It Boy” she’s assigned to protect. But she’s ambushed by the club’s owner, arch demon Julian Ascher. The most powerful demonic entity in Los Angeles, Julian is handsome as sin, a master of temptation who loves nothing more than corrupting pleasure-seeking humans. He won’t release the lost soul Serena is supposed to guard. Unless she accepts his dangerous wager.…

After the disastrous way his human life ended, Julian vowed that no woman would get the better of him again. Yet this sexy-sweet angel, smelling of fresh ocean air and happiness, triggers centuries-old feelings. Now, their high-stakes game of seduction, where angels fall from grace and where demons fear to tread, will lead them either to an eternity in hell…or a deliciously hot. 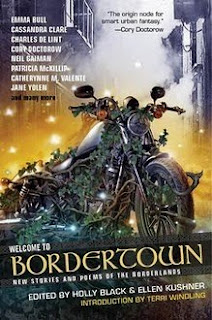 Welcome to Bordertown an anthology
Published! by Random House

Bordertown: a city on the border between our human world and the elfin realm. Runaway teens come from both sides of the border to find adventure, to find themselves. Elves play in rock bands and race down the street on spell-powered motorbikes. Human kids recreate themselves in the squats and clubs and artists' studios of Soho. Terri Windling's original Bordertown series was the forerunner of today's urban fantasy, introducing authors that included Charles de Lint, Will Shetterly, Emma Bull, and Ellen Kushner. In this volume of all-new work (including a 15-page graphic story), the original writers are now joined by the generation that grew up dreaming of Bordertown, including acclaimed authors Holly Black, Cassandra Clare, Cory Doctorow, Neil Gaiman, Catherynne M. Valente, and many more. They all meet here on the streets of Bordertown in more than twenty new interconnected songs, poems, and stories. 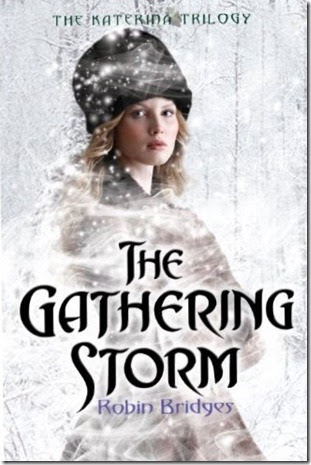 The Gathering Storm by Robin Bridges
TBP: Jan. 10, 2012
Description:
St. Petersburg, Russia, 1888. As she attends a whirl of glittering balls, royal debutante Katerina Alexandrovna, Duchess of Oldenburg, tries to hide a dark secret: she can raise the dead. No one knows. Not her family. Not the girls at her finishing school. Not the tsar or anyone in her aristocratic circle. Katerina considers her talent a curse, not a gift. But when she uses her special skill to protect a member of the Imperial Family, she finds herself caught in a web of intrigue.

An evil presence is growing within Europe's royal bloodlines—and those aligned with the darkness threaten to topple the tsar. Suddenly Katerina's strength as a necromancer attracts attention from unwelcome sources . . . including two young men—George Alexandrovich, the tsar's standoffish middle son, who needs Katerina's help to safeguard Russia, even if he's repelled by her secret, and the dashing Prince Danilo, heir to the throne of Montenegro, to whom Katerina feels inexplicably drawn.

The time has come for Katerina to embrace her power, but which side will she choose—and to whom will she give her heart?
~~~~~~~~~~~~~~

Had to add the last one in case you were sweating and needed something cool to look at! ;) Wouldn't that be perfect NOW?
Oh and I hope you like my new icon. Thought it matched my blog better.
So, what is on your hot wishlist this week?
Posted by Melissa (Books and Things) at 12:00 AM