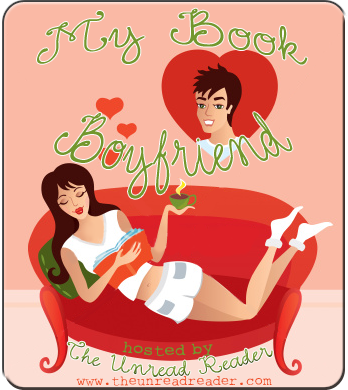 This weeks book boyfriend is inspired by the book I just read, Fury of the Phoenix by Cindy Pon. We were introduced to Chen Yong in the first book

review and notice I don't use the paperback cover of the first book... here is why).

Chen Yong is quite different than most men in China. He is only half Chinese and so has a hard time of growing up in China. In fact he is quite aware he resembles no one anywhere. However, his adoptive family treats him as he was one of their sons born of their own flesh. Plus, they have some money and influence so Chen was spared a bit of hatred of what he might have otherwise gotten from the people in his village. He is skilled, honest, sweet, protective and handsome. He is also frustratingly in love with Ai Ling who loves him back. Frustrating because he doesn't admit it (darn him!). Also, he is swoon worthy because Ai Ling doesn't want to be a wife in the typical sense; she does not want to be placed as a trophy as due her station. Chen Young understands this and loves her because of her ability to be true to herself. So, what does my new addition to my man harem look like? First I have to share the picture by Phoenix Lu that Cindy Pon had commissioned for her vision of both Chen Yong and Ai Ling:

Not bad at all. Great edition to my man harem. Cindy Pon herself did think of someone in the flesh *giggles* and I would have to agree! Her choice as well as mine is Daniel Henny:
No, I have no idea what that says... but who cares?
Don't you think he's a good addition to the man harem?
Posted by Melissa (Books and Things) at 12:00 AM