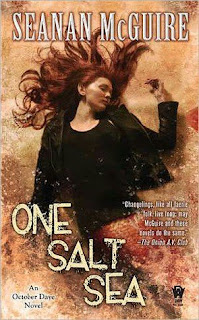 October “Toby” Daye is settling into her new role as Countess of Goldengreen. She's actually dating again, and she's taken on Quentin as her squire. So, of course, it's time for things to take a turn for the worse.

Someone has kidnapped the sons of the regent of the Undersea Duchy of Saltmist. To prevent a war between land and sea, Toby must find the missing boys and prove the Queen of the Mists was not behind their abduction. Toby's search will take her from the streets of San Francisco to the lands beneath the waves, and her deadline is firm: she must find the boys in three days' time, or all of the Mists will pay the price. But someone is determined to stop her — and whoever it is isn't playing by Oberon's Laws...

*looks innocent* Yes... I need to get the first 4 books in the series starting with Rosemary and Rue (October Daye, Book 1)

. It's not like I do it necessarily on purpose, *nervous laugh* but just look at the cover! It's a mermaid! I love mermaid stories and this one looks like it is combined with the darker world of UF. Oh I needs it... even if it is the middle of the series. *shy smile*

Uh... so what are your ~I shouldn't want it yet before I read the rest of the series~ wishlist books this week? ;D
Posted by Melissa (Books and Things) at 12:00 AM