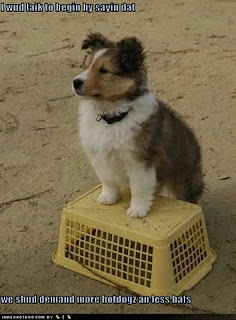 First, I'll start on my soapbox. As I posted in the last review that I had something more to say. Well, as I first started this book, Katiebabs of Babbling about Books and More had a post about Cindy Pon's book, The Silver Phoenix. It was about book whitewashing of the covers and how both Borders and Barnes and Noble either had no books in stock or very little so they could state that it needed a new cover to do better at their stores. The complete and well thought out post and subsequent discussion is HERE. In the past I admit I didn't pay attention to this type of problem out there in the industry. I mostly bought or read books based on suggestions before I started blogging. As I started to do more blogging and finding lots more books because recommendations grew, I noticed that, like others, I gravitated toward certain covers and away from others. In fact, I often mention the covers in my reviews now. So, for a company to deem that I just couldn't handle a cover with someone of color on it is just horrible. It's almost like saying that we only find beauty in such a small definition. Yes, they are more concerned with the bottom line, but by actually making up your "facts" in this way is just wrong. Plus, it's not very flattering to the rest of us book buyers out there.
Personally, I'm a bit confused. I was one who just loved the cover. If you look at the other comments in Katiebab's post, people who were less thrilled about it usually complained about the color (anti-pink girls) but not about the race. Look on Goodreads reviews and you will see that most were attracted to the cover. So, I charge Borders and B&N with being total snooty snots with their choice of not carrying the book with that cover. While I do not think there is enough evidence to charge with racism, there is enough to charge them with not believing that their buyers have intelligence. So, do I suggest buying this book with all the controversy? (Young people close your eyes) HELL YEA! (okay, you can open them now) It's a great book and didn't deserve the treatment it received. Plus, the more we buy books with characters with color in them, that itself will, I believe, start to send a good message to those snooty snots. :)
Oh, and speaking of books that have characters with color... Cindy Pon, herself, is having a giveaway of several books like this. Just comment at her blog. What a wonderful idea! Also, take a look at her list and put them on your own wishlist. I know I have. ;)
Which brings me to my Wishlist...


When Ai Ling leaves her home and family to accompany Chen Yong on his quest to find his father, haunted by the ancient evil she thought she had banished to the underworld, she must use her growing supernatural powers to save Chen Yong from the curses that follow her.

Well, now for the giveaway...

I'm going to giveaway a necklace that I made with the cover on it. I had two main reasons for making this necklace. One is protest. I want to protest the practice of whitewashing our covers. The second is to promote this great book without having to give up my copy (hey, it was signed specifically to me... and well, I'm a greedy snot). So, I made a pendant like I had blogged about here. This is the cover of the book on one side and the jade pendant on the other. Obviously, the pictures are not mine, and I am giving this away FREE. So, if you wanna... you got to leave a comment. Please leave your e-mail addy if it's not in your profile. I'll end this on Friday July 16, 2010. It's 15 1/2 inches long, with pendant, it's 17 1/2 inches. Doesn't need a clasp, it should just slip over your head. Hope you think it's worth a comment. :) US addys only, please. 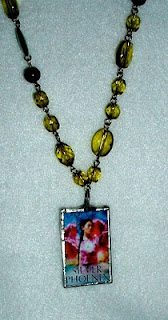 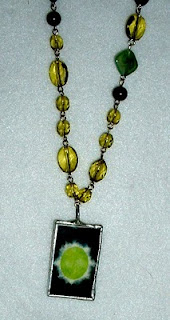 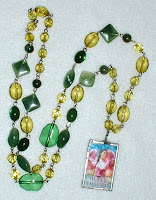 Email ThisBlogThis!Share to TwitterShare to FacebookShare to Pinterest
Tag! You're it!: giveaway, Soapbox, Wishlist