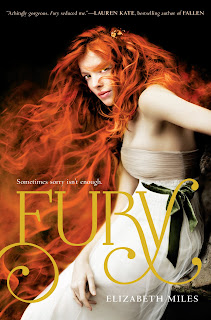 
In book one of the Fury trilogy, Emily Winters and Chase Singer discover that a little guilt isn’t the only consequence of doing wrong. After Emily hooks up with her best friend’s boyfriend and Chase’s secret harassment of a social outcast spirals out of control, three mysterious Furies—paranormal creatures that often assume the form of beautiful female cousins—come to town to make sure that Emily and Chase get what they deserve. Not everyone will survive—and those who do will discover there are worse punishments than death. But when Emily befriends outcast Drea and learns more about who and what the Furies really are, she becomes resolved above all to take them down and stop their plans. Little does Emily know, by confronting the Furies, she could become inextricably bound to them for life.

The lacy gold mapped her entire body. A finely-wrought filigree of stars, vines, flowers, butterflies, ancient symbols and words ran from her feet, up her legs, over her narrow waist, spanned her chest and finished down her arms to the tips of her fingers…

Born into a life of secrets and service, Chrysabelle’s body bears the telltale marks of a comarré—a special race of humans bred to feed vampire nobility. When her patron is murdered, she becomes the prime suspect, which sends her running into the mortal world…and into the arms of Malkolm, an outcast vampire cursed to kill every being from whom he drinks.

Now Chrysabelle and Malkolm must work together to stop a plot to merge the mortal and supernatural worlds. If they fail, a chaos unlike anything anyone has ever seen will threaten to reign.

So, what is on your paranormal wishlist this week?
Posted by Melissa (Books and Things) at 12:00 AM