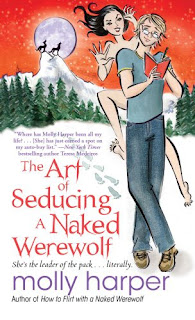 The Art of Seducing a Naked Werewolf by Molly Harper
TBP: March, 29, 2011
From Goodreads:


Generations of werewolves have been secretly residing in a secluded valley a stone’s throw from Grundy, Alaska. So when a snooping Outsider comes to Grundy to investigate rumors of lycanthropic shenanigans in the area, the valley’s pack alpha, Maggie Graham, resolves to chase him away, even if doing so takes a quick bite on the butt. What a pity that researcher Nick Thatcher turns out to be so drool-worthy, and that his kisses make Maggie want to sit up and beg. Maggie just can’t seem to convince Nick to leave . . . and even worse, she can’t convince herself to stay away from him. Cross-species dating is problem enough for a harried alpha female, but on top of that, a rival group of werewolves is trying to move into the valley. With interpack war threatening, Maggie can’t afford to be distracted. Combining romance and a career can be tough for anyone; for a werewolf in love with a human, it may be disastrous. . . .


New from #1 New York Times bestselling author Meg Cabot, a dark, fantastical story about this world . . . and the underworld.

Though she tries returning to the life she knew before the accident, Pierce can't help but feel at once a part of this world, and apart from it. Yet she's never alone . . . because someone is always watching her. Escape from the realm of the dead is impossible when someone there wants you back.

But now she's moved to a new town. Maybe at her new school, she can start fresh. Maybe she can stop feeling so afraid.

Only she can't. Because even here, he finds her. That's how desperately he wants her back. She knows he's no guardian angel, and his dark world isn't exactly heaven, yet she can't stay away . . . especially since he always appears when she least expects it, but exactly when she needs him most.

But if she lets herself fall any further, she may just find herself back in the one place she most fears: the Underworld.

So, what are your wishes this week?
Posted by Melissa (Books and Things) at 12:00 AM