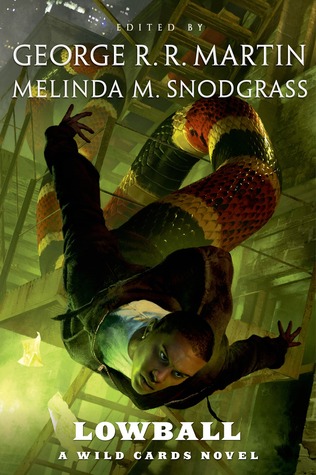 
Decades after an alien virus changed the course of history, the surviving population of Manhattan still struggles to understand the new world left in its wake. Natural humans share the rough city with those given extraordinary—and sometimes terrifying—traits. While most manage to coexist in an uneasy peace, not everyone is willing to adapt. Down in the seedy underbelly of Jokertown, residents are going missing. The authorities are unwilling to investigate, except for a fresh lieutenant looking to prove himself and a collection of unlikely jokers forced to take matters into their own hands—or tentacles. The deeper into the kidnapping case these misfits and miscreants get, the higher the stakes are raised.

My thoughts:
I had not read any of the Wild Card stories prior to reading this one. You don't have to know a thing about those stories to get into this book. It reads like a standalone. I was actually expecting an anthology with all the authors writing the book but I got a full book. In one way it was a bunch of stories about various characters taking the spotlight at one time or another, but it felt cohesive. I feel that is the work of the two editors, George R. R. Martin and Melinda M. Snodgrass.

There were some lulls to the story I would think about skipping but then something would catch my attention. A character would have an interesting trait and I was captivated. The pacing felt a bit uneven when this happened, but not as much as you would think with so many authors. And although you sometimes felt you would have rather followed one character so you didn't feel like you only got a partial story at the same time it felt complete enough. It was just a bit different than what I am used to reading in the format I have been reading. I did enjoy it.