Bring Me A Dream by Erin Kellison 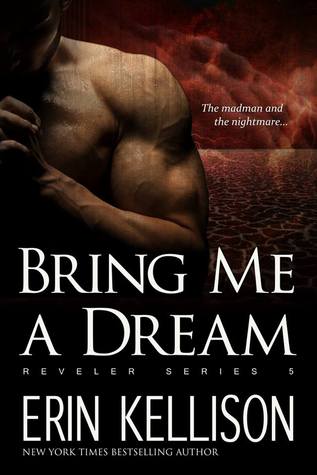 
The madman and the nightmare…

Vincent Blackman is a little…unhinged. He recently fought a nightmare from the world Darkside and won. Now he fears nothing and wants revenge on the man who had his father brutally murdered. And how convenient to find an ally in Mirren Lambert, his enemy’s gorgeous and sexy daughter. Unfortunately, she’s made a few enemies of her own.

She might be a nightmare, but she’s also his ultimate fantasy.

Mirren was born half human, half nightmare. She was on the run from her ruthless father, but when he abducted her young son, she knew he had to be stopped once and for all. Dangerous Vincent is just who she needs to help her, though she has a perilous part to play as well, infiltrating her father’s circles to discover his secrets. They learn something dark is stirring in the dreamwaters, and it’s reaching toward the waking world. Vincent might be holding on to the last of his sanity, but that’s okay, as long as he holds on even tighter to her.

Bring Me A Dream is the fifth installment in the Reveler serial, a hot paranormal romance set in a world where shared dreaming is a new pop culture phenomenon that allows people to indulge their wildest fantasies. But there are also unknown dangers Darkside; nightmares are slowly infiltrating not only dreams, but the waking world as well. And behind them all is a shadowy entity called the Sandman.

My thoughts:
Okay, what is it about the bad guy and girl? This is their story and I loved how interesting it was. Maybe it is finding out the motivation and what drives them to be bad? Well, in this case the motivation isn't bad at all. In fact it is noble. Don't let that disappoint you, their solutions are anything but noble. :) In fact, it is like most "bad" guys like this, their emotional states and morals seemed to be stunted but they keep trying even if they know it is wrong.

I give this book 4 stars and wished it was longer. I'm so glad the next book is out so I can devour it as well.
Posted by Melissa (Books and Things) at 12:00 AM