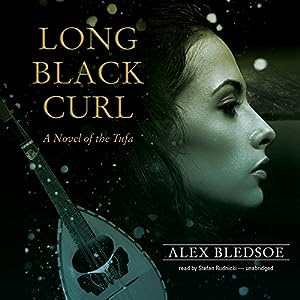 
In all the time the Tufa have existed, only two have ever been exiled: Bo-Kate Wisby and her lover, Jefferson Powell. They were cast out, stripped of their ability to make music, and cursed to never be able to find their way back to Needsville. Their crime? A love that crossed the boundary of the two Tufa tribes, resulting in the deaths of several people.

Somehow, Bo-Kate has found her way back. She intends to take over both tribes, which means eliminating both Rockhouse Hicks and Mandalay Harris. Bo-Kate has a secret weapon: Byron Harley, a rockabilly singer known as the "Hillbilly Hercules" for his immense size and strength, who has passed the last 60 years trapped in a bubble of faery time. He's ready to take revenge on any Tufa he finds.

The only one who can stop Bo-Kate is Jefferson. Released from the curse and summoned back to Cloud County, even he isn't sure what will happen when they finally meet. Will he fall in love with her again? Will he join her on her quest to unite the Tufa under her rule? Or will he have to sacrifice himself to save the people who once banished him?

We know the major mystery of the Tufa and so we aren't frustrated with that mystery going into this book. In some ways it is relaxing but in others I sort of missed the curiosity of what was really going on. However, with the Tufa you are not without mystery and this book takes you not just back in the Tufa history, but in music history as well.

I don't want to give too much away to those that have not picked up this series, but I did enjoy trying to figure out exactly what Bo-Kate was up to in this book and how Mandalay (a 12 yr. old girl) will figure out a way to defeat her or be defeated. There were a few interesting twists and several aspects to the book that surprised me.

I also want to say something about Stephen Rudnicki's narration. At first I thought I would have a hard time getting used to his low and gravely voice however, I did seem to find myself enjoying the narration after a couple of chapters. He did seem to be a bit nasal at the beginning (like he had a bit of a cold) but as I got used to his low voice, it also seemed to lose the nasal quality. I also thought I would have problems with the voices of the women and especially a 12 yr. old girl. I didn't. It didn't seem odd to me nor did his voices take me out of the story. It worked.

I give this audio 3 1/2 stars. I enjoyed moving to another mystery while finally knowing what or who about the Tufa. This is a series I recommend to those that enjoy some twisty aspects and mysteries to a close knit community where music is life.


Crafts I did while listening to the audio:
I did 2 bags and 1 wallet. I finished another Butterfly Sling by Emmaline Patterns (the one with the butterfly material which I started from the other audio) and I started on some holiday gifts. I made a Snappy Mani Wallet (free pattern) from Noodlehead Designs. I finished a Teardrop Sling by RLR Creations (size small) for a little boy. I will do his sister's sling next and hopefully show it to you in the next audiobook/craft review! :)
Posted by Melissa (Books and Things) at 12:00 AM

Email ThisBlogThis!Share to TwitterShare to FacebookShare to Pinterest
Tag! You're it!: adult, audio, magic