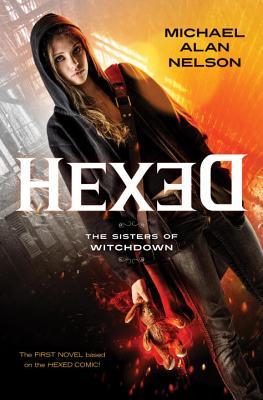 
Luci Jenifer Inacio das Neves, Lucifer for short, isn't your typical teenaged girl. She's a thief who survives by stealing bad things from bad people in the magical and mystical underworld hidden beneath our own. So when a policeman's daughter, Gina, is kidnapped by a force he can't explain, Lucifer is the only one who has a chance at getting his daughter back.

With the unsolicited help of Gina's friends, including Gina's boyfriend David, Lucifer's investigation leads to the unfortunate truth of the kidnapping. Gina was taken to an otherworldly dimension by a creature of unspeakable evil: one of the Seven Sisters of Witchdown. Against all odds, Lucifer must use every magical tool hidden in her trick bag to steal her way into the Shade and bring Gina back before the Sister sacrifices her for her own dark ends. But the closer Lucifer gets to Gina, the closer she gets to David. And David to her. Lucifer must risk her life by confronting demons, witches, and the cruel demigoddess controlling her destiny - all to save the one girl who stands in the way of Lucifer finally finding love.

My thoughts:
This is a book that is based on a comic series. I haven't read the comic so I was curious as to how this translates into book format. It is well written and I think that even those YA readers who are rather young would enjoy this one. It does have a horror element to it so I guess it depends on the reader as to how well they would be able to handle it. Those that read adult horror will have absolutely no problems with this one.

While I did enjoy Lucifer and how she got her name, I did not enjoy the romance that developed here. I also didn't care for her attitude about the romance. It was someone I just didn't see her falling for but I did get how she craved normalcy. The distraction of the boy just didn't ring true to me and I would have loved to see her more confident at least when she wasn't directly dealing with the relationship. She might be a girl, but one that supposedly lived though a great number of tragedies.

While I didn't enjoy her foray into a romantic relationship, I did like the adventure and the insurmountable odds she was pitted against. It was a bit repetitious in the telling of the story, but I do think kids wouldn't mind it at all. I give this book 3 stars and do recommend it to the young YA crowd that likes horror. It's not too scary but gives enough horror to satisfy.
Posted by Melissa (Books and Things) at 12:00 AM

Email ThisBlogThis!Share to TwitterShare to FacebookShare to Pinterest
Tag! You're it!: horror, magic, witch, YA