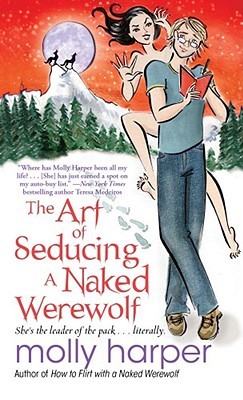 
Generations of werewolves have been secretly residing in a secluded valley a stone’s throw from Grundy, Alaska. So when a snooping Outsider comes to Grundy to investigate rumors of lycanthropic shenanigans in the area, the valley’s pack alpha, Maggie Graham, resolves to chase him away, even if doing so takes a quick bite on the butt.

What a pity that researcher Nick Thatcher turns out to be so drool-worthy, and that his kisses make Maggie want to sit up and beg. Maggie just can’t seem to convince Nick to leave . . . and even worse, she can’t convinceherself to stay away from him. Cross-species dating is problem enough for a harried alpha female, but on top of that, a rival group of werewolves is trying to move into the valley. With interpack war threatening, Maggie can’t afford to be distracted.

Combining romance and a career can be tough for anyone; for a werewolf in love with a human, it may be disastrous...

My thoughts:
I have to admit, I do enjoy Molly Harper's humor in her PNR books. I enjoyed this second installment and I even read the first (proof: How to Flirt With a Naked Werewolf review). In this one we get Maggie, the kick-arse alpha near Grundy AK. No one messes with her, but there is something strange going on and there is this hot nerdy guy that keeps getting under her skin.

I enjoyed revisiting this world and really enjoyed both Maggie and Nick. I actually wasn't sure I was going to like Nick, but was quickly charmed by him not taking crap from Maggie and even standing up to the surly werewolf. Not even her second has that kind of bravery. I also liked the twists in the end which kept with the feel good feeling of this book.

I give this book 4 stars. If you enjoy humor, lots of smexy weres and a cute romance, I suggest this series. I can't wait for the next installment.


“You are so whipped.” “Baby sister, when your wife looks like that”—he pointed toward Mo’s kitchen ballet—“and cooks like this”—he scooped up some homemade chips and popped them into his mouth—“being whipped isn’t so bad.”

She made a face and whispered fiercely, “You know I didn’t. Hell, I didn’t have a good time at my baby shower. Baby showers should be reserved as punishment for betrayers in the Seventh Circle of Hell. But I went. Why? Because that’s what being part of a family is all about, spending a Sunday afternoon doing stuff you really don’t want to do.”

As a matter of fact, the idea that he’s trying to exploit innocent furred people instead of modeling for underwear ads—the way God obviously intended—is reason enough to kill him.

Email ThisBlogThis!Share to TwitterShare to FacebookShare to Pinterest
Tag! You're it!: Humor, Romance, werewolf