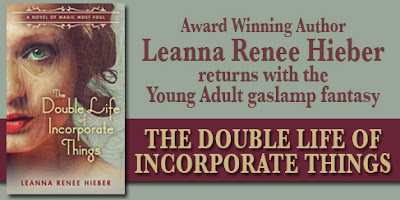 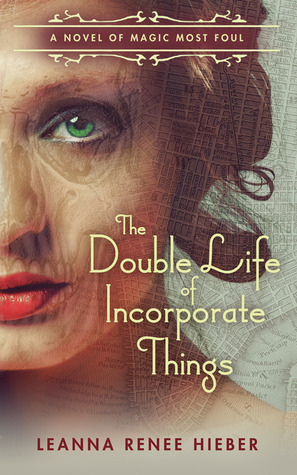 The Double Life of Incorporate Things
by Leanna Renee Hieber


"Just when we think our nightmares are over, the Society has invented a new horror. Around every corner a shadow, behind every whisper a demon. If we don't end what the devils began, we will die haunted..."

The Magic Most Foul saga takes a deadly turn as The Master’s Society unveils its next ungodly avenue of paranormal experimentation. First, souls were split from bodies. Then the dead were reanimated. Now, a mind-altering chemical has been unleashed in Manhattan. Demonic trauma and terror escalates for the dashing Lord Denbury and brave, feisty Miss Natalie Stewart. Together with their stalwart friends and unlikely heroes, they take the fight directly to the Denbury estate, where a collective evil has awakened. But are Natalie and Jonathon prepared for all the sacrifices that shall be asked of them? With their very lives and the sanctity of their mortal souls at stake, these lovers are past the point of no return...

I set the paper down slowly enough to see the thin edges shake as the full, personal impact of the newspaper article hit me.

"Natalie, what is it?" Jonathon asked, staring at me with those eviscerating blue eyes of his. I opened my mouth but no sound came out. Damn my unpredictable, inconstant voice.

For the past many months now, I'd been pummeled by one strange event after another, pulled into the center of a paranormal whirlpool. At least in this case, we had an inkling, some sense of the next onslaught. Still, a foreshadow was hardly a comfort. We couldn't have guessed the scope.

Now it wasn't just myself or Jonathon Whitby, Lord Denbury in danger, with the occasional collateral victim. Now it was a crowd. I knew the Association. I adored them. They weren't hooligans or criminals, they were gentle souls, artistic and individual. Overdramatic, yes, but a threat? Hardly. This maligning was the work of The Master's Society, turning lambs into lions in ungodly experiments, leaving them for fodder in sensational, indelicate journalism. It could only get worse. Exponentially worse.

"It's begun," I finally managed to reply quietly, sliding the paper across the lacquered console table behind the sofa toward Jonathon's reach. "Another phase. They've gone after the Association. And the papers will vilify those poor dears, every last one of them. Jonathon, the demons won't give up..."

First two books in the series:

Leanna is a proud member of member of the Science Fiction and Fantasy Writers of America and the International Thriller Writers. She is a proud co-founder of Lady Jane's Salon Reading Series in New York City. A member of Actors Equity Association and SAG-AFTRA, Leanna works often in television and film on shows like Boardwalk Empire. Active in Harry Potter fandom, answers to the name Lady Malfoy. When not on deadline or on set, she loves a good Goth club, wandering graveyards and visiting Family in Salem. She resides in NYC with her husband and their beloved rescued lab rabbit.

Fill out rafflecopter form below for the $50 Amazon giftcertificate. The giveaway is sponsored by the author and publicist and is being given away by them. The giveaway ends on Jan. 6th.
a Rafflecopter giveaway
Posted by Melissa (Books and Things) at 12:00 AM

Email ThisBlogThis!Share to TwitterShare to FacebookShare to Pinterest
Tag! You're it!: book blitz, giveaway