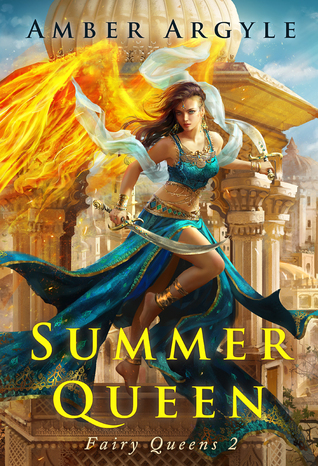 
Nelay never wanted to be queen.

Poised to become the most powerful priestess in Idara, Nelay doesn’t have time to become a pretty bauble for the king. She’s too busy saving her people from the invading army sweeping across her kingdom.

But in defeat after defeat, Nelay begins to realize a bigger power is at play than that wielded by mere mortals. Only she can stand between the cinders of her once-great nation and the vengeance of a goddess.

First, let me comment about the cover. While I LOVE the cover, I wished Nelay would have been darker skinned as she is in the book. Otherwise I think the cover is stunning.

This is Nelay's story. Her country is besieged with the Winter Queen's territorial inhabitants. They are punishing the Summer Queen's populace with the idea for reparations to the atrocities a king, who is no longer in power. Of course this leads to hypocrisy and they are becoming the thing they hate. While all this strife is going on we find ourselves on a journey with Nelay, the girl we met in the novella, Fire and Ash. She is on a journey to find out what happened to her parents and hopefully rescue them. While on this journey she finds out more about herself and where her strengths lie. She is drawn into political intrigue both in the human realm as well as the fae realm. What she choses not just decides her fate but the fate of all citizens under the Summer Queen's rule.

As much as I liked the first book, I have to say that I enjoyed this one more. While there were spots that were a bit slow, it does not stay that way. It actually felt that sometimes there was almost too much action. Mostly because it felt like she needed a break and would have collapsed more than she did while on the adventure. Of course the reason she could go on so much was covered and was fully explained in the book. I just felt so sorry for how much she had to go through. It isn't really a criticism, but more like an empathetic response. :)

I give this book 4 stars. It is a great addition to the series. I would also consider this one either older YA, or NA/Adult. There is a lot of death and it just "feels" like a older book. There is no cliffie, but an open story arc so you know more adventure is coming. I look forward to the next addition.

Her other series, Witch Song (YA genre) has the first book free at Amazon.
Posted by Melissa (Books and Things) at 12:00 AM

Email ThisBlogThis!Share to TwitterShare to FacebookShare to Pinterest
Tag! You're it!: adult, Faerie, fantasy, new adult