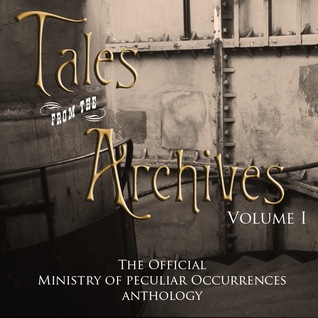 
The Ministry of Peculiar Occurrences has many forgotten stories in its Archives. Stories of madcap adventures in all corners of the Empire, dark doings in hidden places, and mysterious devices and artifacts that the everyday citizen should never become aware of for fear it would quite undo their minds.

The Evil that Befell Sampson by Pip Ballantine- Eliza D Braun is a young field agent in the Ministry of Peculiar Occurrences (South Pacific Branch) when she is asked by New Zealand’s preeminent suffragist to investigate some strange goings within the organisation. She cannot possibly imagination that this little case will alter her entire life and thrust her into a world barely prepared for her.

Dust on the Davenport by O M Grey – Agent Simon R. Boswell, still considered the green agent of the Ministry, takes on his own a supposed haunting in Islington. Hauntings tend to be nothing too serious for agents specializing in the unexplained; but for Simon, this case supplies surprises of all kinds, around every corner…

The Astonishing Amulet of Amenartas by Nathan Lowell- Agent Heathcliff Durham finds himself crisscrossing Africa, looking for an Amulet that could spell disaster for any who come near it. Battling blistering heat, starvation, wild animals, and despair, he is not comforted by the company of a rough and ready sort named Morrison. Soon Durham begins to suspect he may never return home—and to top it all off the tea has almost run out.

A Ruby in Rain by Grant Stone – From the farthest edge of the Empire, New Zealand agents Lachlan King and Barry Ferguson are called to interview a recent arrival to Auckland’s prisons. An infamous gambler, according to the constable’s account, has turned himself into their custody, not for the safety of society but for his own. The Ministry steps in to uncover a man’s story of impressive luck, and more incredible vision.

This collection of stories are from the archives of the Peculiar Occurrences office on what the various spies have been doing and the mysterious reports Eliza and Wellington talk about. It is a fun collection and can be read as a standalone if you haven't read any of the books in the series. My favorite story was Eliza and Wellington's story but I also enjoyed the rest as well. Most of the books are done by various narrators and so there is a mix of good and okay storytellers just as there are stories in the various anthologies you get. I do love it when Eliza and Wellington introduce the stories and those are also the ones I tended to enjoy as well.

As with all anthologies I enjoyed some, loved some and found some were okay. None were horrible and overall I had fun. One thing I need to tell you is when you are listening to the stories, there will be some background noise pertinent to the story. A gunshot, a foot step, things of this nature are thrown in to make it more like the old stories when there was no tv. :) I wasn't prepared and jumped several times until I realized that is what is going on. LOL It was odd to turn when there were footsteps but no one behind me. :D Not to mention the gunshot. So be prepared. ;)

I give this collection 4 stars. It is fun and a great addition to the series. I will be listening to the rest in the other collection as time permits. It is free on iTunes as audio but you can also get it in ebook format. Those do have a price on it's head though. :)
Posted by Melissa (Books and Things) at 12:00 AM

Email ThisBlogThis!Share to TwitterShare to FacebookShare to Pinterest
Tag! You're it!: anthology, audio, mystery, Steampunk