The Heavens Rise by Christopher Rice 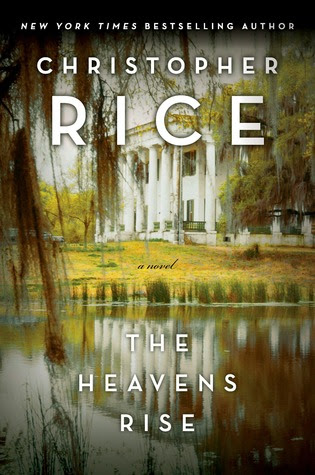 
It’s been a decade since the Delongpre family vanished near Bayou Rabineaux, and still no one can explain the events of that dark and sweltering night. No one except Niquette Delongpre, the survivor who ran away from the mangled stretch of guardrail on Highway 22 where the impossible occurred…and kept on running. Who left behind her best friends, Ben and Anthem, to save them from her newfound capacity for destruction…and who alone knows the source of her very bizarre—and very deadly—abilities: an isolated strip of swampland called Elysium.

An accomplished surgeon, Niquette’s father dreamed of transforming the dense acreage surrounded by murky waters into a palatial compound befitting the name his beloved wife gave to it, Elysium: “the final resting place for the heroic and virtuous.” Then, ten years ago, construction workers dug into a long-hidden well, one that snaked down into the deep, black waters of the Louisiana swamp and stirred something that had been there for centuries—a microscopic parasite that perverts the mind and corrupts the body.

Niquette is living proof that things done can’t be undone. Nothing will put her family back together again. And nothing can save her. But as Niquette, Ben, and Anthem uncover the truth of a devastating parasite that has the potential to alter the future of humankind, Niquette grasps the most chilling truths of all: someone else has been infected too. And unlike her, this man is not content to live in the shadows. He is intent to use his newfound powers for one reason only: revenge.

I've been wanting to read a book by Christopher Rice for a while now. Was happy when I got the chance. This is not a sweet story, but a horror book. I seem to be able to handle horror books better than movies (paranormal and monster movies are good, but no slasher films). This does have blood, guts and gore, but not so much you are running for the bathroom. It has just the right amount to keep the atmosphere of horror running throughout the book.

I do have to warn those that are like me and do not like to see animals hurt. There are a lot of scenes with animals being killed or dying. However, this is more a plot driven book so a lot of these scenes are kept a bit at arms length. Still, those like me will have a bit of trouble getting through those scenes. They are there with purpose. It lends the correct amount of horror to what is going on and who is doing it.

Now even though this is plot driven more than character driven, I think it works. You do connect on some level more to the secondary characters (who really come out as primary). Still, it isn't a book where you connect to those characters deeply. I feel it is purposeful in that way so it works. It helps keep up the suspenseful world in which these characters live.

In the end I give this book 4 stars. I found the first half of the book a bit tighter than the last, but it was still enjoyable and has an opening for a series if the author wants to go there.

Email ThisBlogThis!Share to TwitterShare to FacebookShare to Pinterest
Tag! You're it!: horror, magic