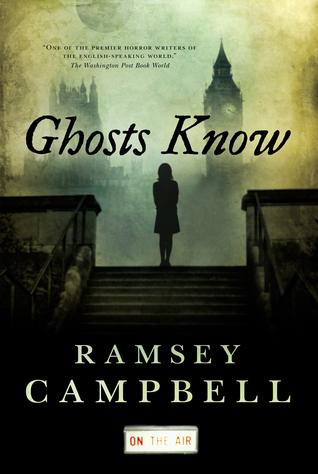 
Ramsey Campbell's Ghosts Know is a fascinating exploration of the twists and turns of reality-media personalities, the line between the dead and the living… and how the truth can be twisted to serve all manner of reality.

Graham Wilde is a contentious, bombastic host of the talk radio program Wilde Card. His job, as he sees it, is to stir the pot, and he is quite good at it, provoking many a heated call with his eccentric and often irrational audience. He invites Frank Jasper, a purported psychic, to come on the program. He firmly believes that the man is a charlatan, albeit a talented one. When Jasper appears on his show, Wilde draws upon personal knowledge about the man to embarrass him on air, using patter similar to that which Jasper utilizes in his act.

Wilde's attack on Jasper earns him the enmity of his guest and some of the members of his audience. He next encounters Jasper when the psychic is hired by the family of a missing adolescent girl to help them find her. Wilde is stunned and then horrified when Jasper seems to suggest that he might be behind the girl's disappearance.

Thus begins a nightmarish journey as circumstantial evidence against Wilde begins to mount, alienating his listeners, the radio station, and eventually, his lover. As Wilde descends into a pit of despair, reality and fantasy begin to blur in a kaleidoscope of terror…

My thoughts:
The author writes horror, but for me this book was more a thriller mystery book. I could see how it is labeled horror as you did feel like you were on the edge of your seat trying to figure out what was going on. The main character, Graham Wilde is an arrogant radio show host who is trying to please everyone for a job he hates. He is quick to anger, but has not shown any real aggression... or has he? Unfortunately I did not like his character until the end. Still, I was drawn to what was happening and wanted to solve the murder mystery he found himself surrounded.

I didn't like Graham because he was arrogant, too quick to anger and he kept pulling stupid stunts and getting himself integrated into the murder mystery. He just couldn't see what he was doing to himself because he was too busy pointing the finger at others. However, it was a very clever way by the author to get him involved in a murder he wouldn't have any real association with otherwise.

I also admit that I was a bit lost at the beginning. Not sure why or if it was me or the book, but I just couldn't keep who was who straight in my head until about 1/2 the book. It wasn't crucial to the mystery, just confusing. This also wasn't a big character driven book for me, but it drove me in it's plot. I really became involved in who did what and why.

I give this book 3 stars. I personally like a more character driven plot but I will say that the mystery itself really drew me in. I do like the twists and turns this book took and I didn't guess who did it in the end. So for those that like a book that keeps you guessing, this may be your book!
Posted by Melissa (Books and Things) at 12:00 AM

Email ThisBlogThis!Share to TwitterShare to FacebookShare to Pinterest
Tag! You're it!: horror, mystery, thriller