On Vampire Fatigue in 2013
By Skyla Dawn Cameron

Vampires. We’re all sick of them.

I read slush for a while, I remember when every other book was about those loveable fanged hellions. And here I am with, you guessed it, vampires.

In my defense, Bloodlines—where the lead character is a vampire assassin named Zara Lain—was originally written in 2004. It went through the slow, slow machine that is known as Publishing for a few years to be released mid-2008. A change in my situation meant it was a few more years before the rest of the series came out—2011, in fact, as I wanted to rewrite and revise Bloodlines before the rest of the books released—and the market was well-saturated by that point.

But vampires endure because there’s a lot that can be done with them.

Mine come from being infected with a demonic parasite. The parasite invades the host, works its way to the brain. The body goes into stasis for ten to twelve years as the parasite takes over, changing the host’s body to accommodate it. Denser bones, stronger muscles, all to help it survive. It requires blood so the heart pumps, but many other organs are changed and shifted around.

I was asked by a few readers where this idea came from. Honestly...it came from story necessity. For my heroine’s backstory to work, I needed a block of time to pass between her “death” as a human and her awakening as a vampire, and then I had her wake early because I needed a reason why her maker wasn’t there to retrieve her on time. That writer necessity turned into great mythology I could—and have—played with for the rest of the books in the series, even when they don’t center on vampires.

I’m also the sort of reader who is drawn out of very illogical world building. Vampires commonly don’t need to breathe—okay, I get that. But they still have to draw in oxygen to be able to speak, right? Also, vampires quite commonly have sexy times in books but, uh, boy vampires? Don’t they need some blood pumping you-know-where in order for that part to, well, work?

These are the questions that keep me up at night.

I wanted to have some sort of possible biological basis for any vampire mythology I used—I’m obviously not a biologist and there are holes in my science, such as it is, but I aimed to make it plausible. My vampires still have plenty in common with ones of myth: an allergy to sunlight, though they don’t burst into flame; super strength and speed; fangs; requiring blood to live; a stake to the heart will paralyze them (you still have to decapitate to kill). Holy water? Crosses? Mine isn’t set in Christian mythology so if you tossed holy water at Zara Lain, she’d probably blink at you for a moment before shooting you in the head.

Also, they kill. Or, rather, some of them do. They’re not innately evil; Zara Lain’s best friend is a pacifist who doesn’t drink blood straight from the vein and would never kill for it. But Zara will kill you. Probably. Unless she can use you for some other purpose.

“But I’m tired of vampire books, Skyla. Why should I read more?”

Well, random-disembodied-voice-from-this-post, because vampire books are rarely about vampires, per se.

They’re about people. They’re about how we can turn into monsters. They’re about the struggle we have with questions about life and death. They’re about what makes us human. In my case, my books are about finding family in the most unlikely of places, learning to see past the scars built up over centuries, reconciling what you used to be with the monster you’ve become.

And these topics never get old.

If you’re not into that, well...there are explosions, car chases, naughty language, demon-hunting nuns, demon mercenaries, psychics, and a hot warlock.

Vampire books, I believe, tell more about the writer than they do the myth, and as long as the authors writing them bring their own unique perspectives to the table, these books will add something new to an already saturated market.

Her early storytelling days were spent acting out strange horror/fairy tales with the help of her many dolls, and little has changed except that she now keeps those stories on paper. She signed her first book contract at age twenty-one for River, a unique werewolf tale, which was released to critical and reader praise alike and won her the 2007 EPPIE Award for Best Fantasy. She now has multiple series on the go to keep her busy, which is great for her attention deficit disorder.

Skyla is a fifth generation crazy cat lady who lives in southern Ontario, where she dabbles in art, is an avid gamer, and watches Buffy reruns. If she ever becomes a grownup, she wants to run her own pub, as well as become world dictator.

You can visit her on the web at www.skyladawncameron.com. When she’s not writing or being glared at by cats, she’s probably on Twitter. You should ping @skyladawn and tell her to get back to work.

Want to try the series? Guess what? 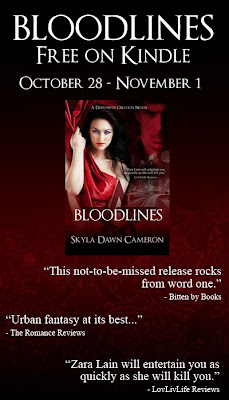 So don't forget to pick it up HERE!

The rest of the series will be 1/2 price at the same time! Lots of adventure!
Posted by Melissa (Books and Things) at 12:00 AM