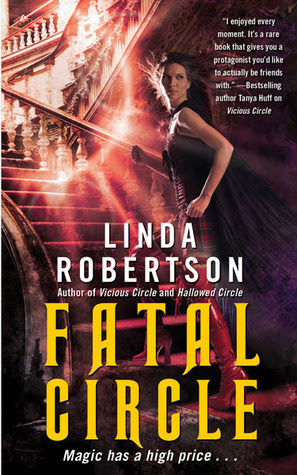 There was a time when Persephone Alcmedi thought her life was hard to manage, what with wondering how to make sure she took adequate care of both her grandmother and her foster daughter, Beverley, whether she'd end up in the unwanted position of high priestess of a coven, and whether her werewolf lover, Johnny, would resist the groupies who hang around his band Lycanthropia.

But that was before the fairies started demanding that Seph's frightening, unpredictable ally - the ancient vampire Menessos - be destroyed . . . or the world will suffer. Seph and Menessos are magically bonded, but that's a secret she dares not reveal to her fellow witches lest they be forced to reject her and forbid her use of magic. And, despite the strain this casts on her relationship with Johnny, as a showdown with the fairies nears, she and Menessos badly need the werewolves as allies.

Life, death, and love are all on the line, but when destiny is calling, it doesn't help to turn away. With the individual threads of their fates twisted inextricably together, can Seph, Johnny, and Menessos keep the world safe from fairy vengeance?

Need to say this first... this series keeps on getting better. I think I've enjoyed this book most of all. I will also have to say that there were times when I thought Persephone was being manipulated again, but really in a much smaller way. However, even though it felt like that at times, it really wasn't that way at all. She was still learning and growing... under fire so to speak... so what she decided made sense. She still is ruled by emotions that overtake her, however, I also suspect that will be a growth aspect coming.

As far as Johnny is concerned... I still don't want to spoil anything I've said in the last review of this series, however he is present with his own trial and tribulations. Menessos is also paramount within this book. FINALLY I have to say that I would trust him much more now. His veneer has cracked and some human emotions erupt. However, do not expect this to happen for much of the book. For those that enjoy his arrogance, you will not be disappointed. :)

In the end I give this book 4 1/2 stars. I really enjoyed this one and even gave a tear at one time in the book. It isn't a cliffie ending, but important information is missing. So much so that I had to look at the back of the next two books (which I have) to see what happens. Had to know, but I'm not telling anything. *evil laugh*

Email ThisBlogThis!Share to TwitterShare to FacebookShare to Pinterest
Tag! You're it!: Vampire, werewolf, witch