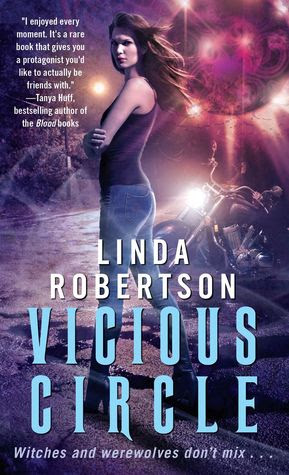 Being a witch doesn't pay the bills, but Persephone Alcmedi gets by between reading Tarot cards, writing her syndicated newspaper column, and kenneling werewolves in the basement when the moon is full -- even if witches aren't supposed to mingle with wolves. She really reaches the end of her leash, though, when her grandmother gets kicked out of the nursing home and Seph finds herself in the doghouse about some things she's written. Then her werewolf friend Lorrie is murdered...and the high priestess of an important coven offers Seph big money to destroy the killer, a powerful vampire named Goliath Kline. Seph is a tough girl, but this time she bites off more than she can chew. She needs a little help from her friends -- werewolf friends. One of those friends, Johnny, the motorcycle-riding lead singer for the techno-metal-Goth band Lycanthropia, has a crush on her. And while Seph has always been on edge around this 6'2" leather-clad hunk, she's starting to realize that although their attraction may be dangerous, nothing could be as lethal as the showdown that awaits them.

In this book we have Persephone a witch who reads the tarot for people and writes a column in the local newspaper about werewolves because they have become the acceptable prejudice in the society. Denied even basic health care rights, Persephone takes up their mantle in the name of justice. In fact, justice has become her call to duty in almost any situation. This brings us to her current problem she must solve.

I liked Persephone and yet she frustrated me. I loved her compassion and her sense of justice, but didn't like the fact that she was so easily manipulated by others. However, it was a minor frustration as it was also a point of growth for the character. She slowly learned how to stand up for herself as she so easily did for others. Although this growth was not complete by the end of the book, I did like that she grew as a character in this book.

The other thing I really enjoyed were the secondary characters. Nana was a hoot even if she was so manipulative at times. Goliath was confusing, but had possibilities for more mayhem in the coming series. Menessos was the perfect villan. Vampire arrogance ftw! :) Oh and Johnny. Johnny! So many of you will love this pseudo bad boy I know I'll be fighting for that were. In the end, I think the secondary characters really made this book.

My biggest complaint was tiny things. At times it seemed when I was reading I was wondering if I picked up the right book and this was the first book. Some things it referenced as if we should know what had happened before. I don't mind this when I know I've picked up a book in the middle of the series, but it was confusing for a first book. This was light and may not be noticed by some, but it was confusing to me nonetheless.

I give this book 3 1/2 stars. It's a good start to the series with a lot of character growth for the main character. I'm looking forward to seeing what other things this witch conjures up.

Email ThisBlogThis!Share to TwitterShare to FacebookShare to Pinterest
Tag! You're it!: Vampire, werewolf, witch