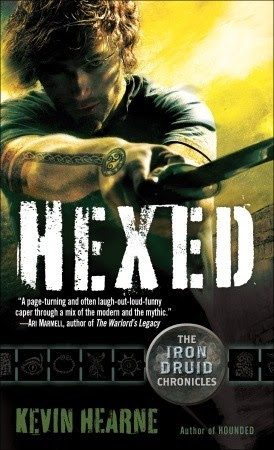 Atticus O’Sullivan, last of the Druids, doesn’t care much for witches. Still, he’s about to make nice with the local coven by signing a mutually beneficial nonaggression treaty—when suddenly the witch population in modern-day Tempe, Arizona, quadruples overnight. And the new girls are not just bad, they’re badasses with a dark history on the German side of World War II.

With a fallen angel feasting on local high school students, a horde of Bacchants blowing in from Vegas with their special brand of deadly decadence, and a dangerously sexy Celtic goddess of fire vying for his attention, Atticus is having trouble scheduling the witch hunt. But aided by his magical sword, his neighbor’s rocket-propelled grenade launcher, and his vampire attorney, Atticus is ready to sweep the town and show the witchy women they picked the wrong Druid to hex.


I read the first book but listened to the second. Felicia of the Geeky Blogger and Missie of the Unread Reader both praised the audio and so I had to try it. I was not disappointed.

Luke Daniels is the voice of Atticus. I can really picture his voice coming from the character perfectly. He also did a pretty good job at the female characterizations even though they obviously had a masculine quality (he couldn't change that but it still worked). His pronunciations of the various languages was superb and it helped me not flub it up in my head as I would have if I read it. For that alone I suggest trying at least one of these in the series on audio.

As with the other book Atticus is faced with some insurmountable odds but this time he doesn't know where the danger is coming from. As the mystery pulls together we start to wonder if we can start to trust others out side of our immediate circle, but like Atticus, I'm wary but willing to accept these others on a limited basis. I think that is a good plan since most magic users have a hidden personal agenda.

I also loved the secondary characters especially the widow and Oberon his faithful hound. They both had me laughing more than once. I love the widow and especially that dog! The vocal characterization of Oberon also puts a smile on his face. However, unlike Atticus I don't know if I'd want that kind of communication with my dog... especially when his vocabulary can outdo my own. Don't want to be put to shame by my own dog... ;)

I give this book 4 stars. It's a lot of fun and I really do recommend the audio.
Posted by Melissa (Books and Things) at 12:00 AM