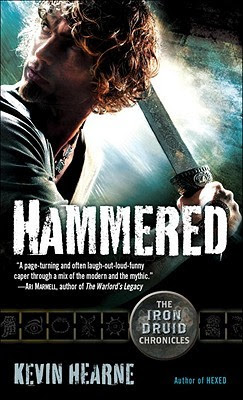 Thor, the Norse god of thunder, is worse than a blowhard and a bully—he’s ruined countless lives and killed scores of innocents. After centuries, Viking vampire Leif Helgarson is ready to get his vengeance, and he’s asked his friend Atticus O’Sullivan, the last of the Druids, to help take down this Norse nightmare.

One survival strategy has worked for Atticus for more than two thousand years: stay away from the guy with the lightning bolts. But things are heating up in Atticus’s home base of Tempe, Arizona. There’s a vampire turf war brewing, and Russian demon hunters who call themselves the Hammers of God are running rampant. Despite multiple warnings and portents of dire consequences, Atticus and Leif journey to the Norse plain of Asgard, where they team up with a werewolf, a sorcerer, and an army of frost giants for an epic showdown against vicious Valkyries, angry gods, and the hammer-wielding Thunder Thug himself.

As for the story. Hm... well there were, of course, many moments of levity in which I LOL'd. I also had a few moments of geeky happiness with the Spock/Kirk playing Devil and Angel on Atticus's shoulders. I also had that same moment of geeky-ness when my fave line from The Princess Bride (hint: it was said by someone named Inigo Montoya...) was also said. Yes, I did have quite a few of these moments that ended up putting a smile on my face. Not to mention his moments of levity with Jesus (yes, that Jesus). However...

The battle this whole thing leads up to was, from the beginning, an extremely bad fight. Why it came about made sense, but not how. To fight in Thor's territory was quite stupid for a paranoid druid and I just couldn't figure out why he would go without a better well thought out plan. They had time... all involved were quite long lived so why go through it with such poor planing? Still, I do believe that this will set us up for what is to come in the next novels and at least even Atticus felt that his involvement was unwise... even if the realization came too late. Kind of rounds out his character a bit with him making mistakes of this kind. Still, the questions of their plan still make me wonder...

Even though I was very disappointed in Atticus (especially when it involved Freya) I admit I lost some of my shine to his character. However, in a series I find this interesting because people are neither wholly good or bad but are somewhere in between. Perhaps this will give him a bit more complexity to his character. The next books, I guess, will determine if that pans out that way. I will be reading or listening to them as this one ended with a bit of mystery and I have to know what is next.
Posted by Melissa (Books and Things) at 12:00 AM

Email ThisBlogThis!Share to TwitterShare to FacebookShare to Pinterest
Tag! You're it!: audio, Faerie, magic, mythology