Kind of a DNF 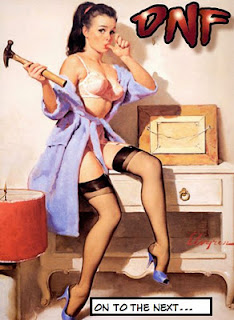 ...sort of...
Have you ever run into this problem? I have a book here I couldn't wait to dive into. The book is:

In this wry take on the post-apocalyptic horror novel, a pandemic has devastated the planet. The plague has sorted humanity into two types: the uninfected and the infected, the living and the living dead.

Now the plague is receding, and Americans are busy rebuild­ing civilization under orders from the provisional govern­ment based in Buffalo. Their top mission: the resettlement of Manhattan. Armed forces have successfully reclaimed the island south of Canal Street—aka Zone One—but pockets of plague-ridden squatters remain. While the army has eliminated the most dangerous of the infected, teams of civilian volunteers are tasked with clearing out a more innocuous variety—the “malfunctioning” stragglers, who exist in a catatonic state, transfixed by their former lives.

Mark Spitz is a member of one of the civilian teams work­ing in lower Manhattan. Alternating between flashbacks of Spitz’s desperate fight for survival during the worst of the outbreak and his present narrative, the novel unfolds over three surreal days, as it depicts the mundane mission of straggler removal, the rigors of Post-Apocalyptic Stress Disorder, and the impossible job of coming to grips with the fallen world.

And then things start to go wrong.

Both spine chilling and playfully cerebral, Zone One bril­liantly subverts the genre’s conventions and deconstructs the zombie myth for the twenty-first century.

I wasn't going to do a post about this one, but I just know I'm not going to get back to this one any time soon if I put it off. I am calling this one a DNF but I am determined to get back to it at a later date (probably a long time from now). I decided to write up a bit about the book because I think after only reading a few pages, I'd have to say it is beautifully written. The descriptions are stunning and his voice is very lyrical. Unfortunately, it is also quite a bit slow in the beginning and despite the lyrical quality, it is hard to immediately connect to the main character.

I am still recommending it to those that love a well written book and do not mind the slowness in the way it starts. Others who just love horror books, I just want to caution you that even though it is a zombie book, it does not have that fast paced running feeling that a lot of those books have. Well, at least in the beginning. Oh and if you do a review of this book, definitely let me know how you feel about it. I want to know if I should have just stuck to it.

I think I just need to be in a mood for it. *sigh* I admit, I just didn't have the patience for it right now. Don't blame the book, blame the reader. Hopefully a better review will come later this year.
I received this book from the publisher and no compensation for my opinion was given.

Ever have a book strike you this way? Wonderfully written but hard to read?

Edit: It looks like a lot of us feel the same way. Sometimes I struggle through and sometimes not. I love that we all feel bad about it. Well... not about feeling bad about it, but that I'm not the only one! ;) ❤
Posted by Melissa (Books and Things) at 12:00 AM