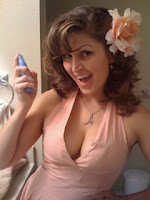 Thanks so much to Melissa for hosting me at her adorable blog! I'm a sucker for all things pin-up, especially one that offers such a wonderful platform to writers.

Several years ago I was sleeping on a futon mattress in Queens on the floor of my best friend's apartment. I was falling asleep quickly after working a double-shift at a vegan restaurant on the Upper East Side. Lying there in the dark I heard my BFF ask me in a little, childlike voice, "Do you think vampires are real?"

I thought about it a moment and replied, "No."

A few moments passed and she asked again, "Not even a teeny, tiny vampire?"

I pondered her query and again replied, "No." This time a little sadly (though just as sleepily.)

We laid there for a few moments processing the fact that we most likely lived in a world without vampires and just how boring that suddenly made the world feel. Then she picked a fight with me over which of us deserved to marry Matt Skiba, the lead singer from Alkaline Trio (who was also a vegan) until my vegan fart set off her carbon monoxide detector, causing her to shout as she wafted pillows in my direction, "If Skiba smells like that you can HAVE him!"

For my birthday last month she bought me the stony bust of a teeny tiny girl vampire. We gave up on either of us bagging Matt Skiba, and we still don't believe in vampires. But we want to! (I genuinely want one to bite my dogs so that they'll live forever!) I think that was the best part about writing the first in my series, Blood Drunk. For a few weeks I got to live in a world of vampires. It made New York City so much more fun to imagine with vampires crawling all over and underneath of it. One of the most exciting concepts was when I realized they'd be able to walk among us during the day since the skyscrapers provide so much shade here. I got to play with a few of my other scariest urban fantasies, such as alligators living in the sewer system and exploring what I knew of secret bars and underground passageways. More than anything, I wanted to bring NYC and vampires to life in this book, and I definitely feel that I accomplished that. This one is written from the male perspective, and writing the second one has been much more fun (and easier) since it's told by a young girl. It's been so much fun, in fact, that I already started on a book about zombies in NYC! New York is already filled with so many eccentricities and zaniness that it's been the perfect stomping ground for some of my most favorite monsters. I hope you enjoy reading it as much as I did writing it!

The girls squeal from the rock, calling to him. The celebration is over. Blue walks toward the rock, prepared to make a speech about how late it's getting and that it'd be best for them to leave the park, when Pixie Cut shouts, "What's that?"

She points to the lake and everyone turns. It looks like an oil slick at first, smoothly gliding on top of the water. The moon is hiding again behind the clouds so for a moment their eyes give into the tricks played by the dark. The spot seems to be approaching, its oval shape twisting back and forth, as it gains momentum. Gliding from beneath a shadow, a set of red eyes appear at its mast.

"Monster!" screams Alexis as she breaks into a run.

The rest of the group is too stunned for a moment, waiting for confirmation. The beast glides up to the rock and that's when the girls run screaming after Alexis. Blue hears their footfalls growing distant from him but the excitement he feels is not fear. It's something else. Is this monster his messenger, his messiah, here to lead him to Lacy? Blue's mind goes almost entirely blank by the time the beast charges onto the shore, taking down a small park fence and knocking Blue backwards. Its weight threatens to crush his bones and without any wind in his lungs, Blue can only gasp for help.

"Minou, off,” a girl cries with authority. The creature backs up, huffing and grunting. Blue rolls to his side trying to help his lungs expand. He sucks hard on the air but a minimal amount enters his chest. The creature stands at attention, its head lifted off the ground and cocked, watching whoever just called it off. It's an alligator. A big one. Blue rolls around a little trying to give pressure to the backside of his lungs, hoping they'll pop back out.

"I'm sorry we had to interrupt you like that," she says.

Her voice is rich as though her tonsils are made of velvet. "I hope Minou didn't harm you."

Blue rolls to the other side, his face red with veins popping out of his neck. As soon as he sees her, he wishes he'd waited until he'd been more composed. She's leaning over him, her hair thick and black, draping around her. Her eyes are wide and as dark as the night. There's a little smile pursed up accenting her heart shaped face. She looks into Blue's eyes and cocks her head slightly as though listening to what they say. Blue hopes they aren't telling on him and the one thought that's bouncing around his head, despite his nearly crushed lungs: You are beautiful.

~~~~~~~~~~~~~
Thanks Angela for stopping by the blog! That story was too funny and you look too cute in your pin-up pic! Love it! Oh and I hope you are all interested in reading this book. Because...

Giveaway!
Angela has offered 2 ebooks and 1 print book for a total of 3 INTERNATIONAL winners! Yep, if you have an e-mail addy or a snail mail address you can win! ;D Just fill out the form below: (click rafflecopter area if you don't see it). If you have any problems with the form, please don't hesitate to e-mail me. Oh and if the form still isn't taking the preference, just tell me in the comments! Gets you another entry that way anyway! LOL

Posted by Melissa (Books and Things) at 5:28 AM