In the Service of the King by Laura Kaye 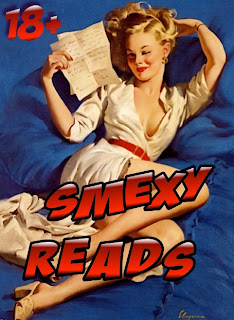 Kael, Warrior King of the Vampires, loathes the Night of the Proffering. He needs the blood of either his mate or a human virgin to maintain his strength, but hasn't enjoyed the ritual since he lost his mate centuries ago. Kael doesn't want a new companion, yet his resolve is tested when he lays eyes on his new offering, Shayla McKinnon. He is drawn to Shayla's beauty and poise...and the submission she offers. She is eager to give him anything he wishes, including her innocence, to please him. Will Kael give in to their overwhelming desire—even if it means risking Shayla's life?

This was a fun short erotica. The whole story revolves around Kael a vampire who is involved in a ritual feeding to keep him immortal and strong. Their enemy are soul eaters, vampires who have turned against tradition and rape and kill their prey in the most heinous way. He hates the feeding because it reminds him of his mate who was killed by soul eaters. Having vowed never to mate again, he is still forced in the ritual feeding as dictated by tradition and magic. Shayla is someone who was brought up with the knowledge of vampires because of her parents dealings with them and also the brutal murder of her sister by soul eaters. She is determined to do something to help the cause. If her only contribution is to keep the vampires strong through her blood, then it is enough for her.

I thought this was a very interesting set up for a paranormal erotica. I really enjoyed Kael who is brooding but caring hottie. He senses that Shayla could be "the one" but already having been in love once, he doesn't want to go through it again. This creates a bit of space for the readers to catch up to his emotions and how he could fall for Shayla. You really get a "feel" *snicker* for the handsome and tortured brute. *sigh*

I have to admit, though, I didn't feel as connected with Shayla. She just seemed a bit too nieve for me to really understand her intense anger with losing her sister. She sort of seemed all over the place to me. So, even if Shayla didn't quite ring true to me, it still didn't stop me from enjoying the short little erotica with a very big smexy scene.

I give this book 3 1/2 stars. If you are looking for a fun short vampire erotica, try this one. I think you'll enjoy it.
I was given this book by the author for my review and no compensation was given.

Btw, come back tomorrow for a bit about Kael (Yum) and a giveaway!
Posted by Melissa (Books and Things) at 12:00 AM

Email ThisBlogThis!Share to TwitterShare to FacebookShare to Pinterest
Tag! You're it!: smexy reads, Vampire