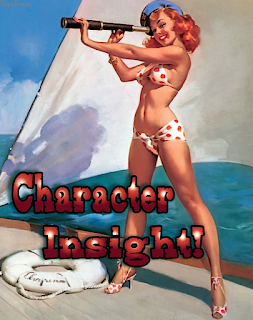 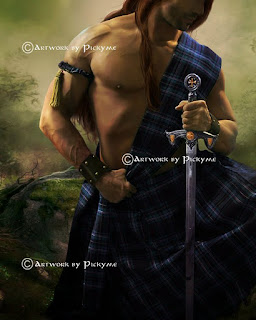 This images inspired Kael and belongs to cover artist Tricia Schmitt.
1. Where is Kael from?

Kael is from the north of Ireland. He lives on his ancestral estate, Dunluce Castle, in County Antrim, on the cliffs overlooking the Atlantic Ocean. The castle was largely destroyed in a battle with the evil Soul Eaters centuries ago, so the vampires now live in a massive hidden underground bunker built into the cliffs below.

As a vampire with an ancient royal heritage, Kael has a long list of titles: Kael the Fair, Warrior King of the Vampires, Chieftain of Clan MacQuillan. He dislikes them all, hating the pomp and circumstances surrounding him as a person, even though he understands the need for it among his people.

Oh, man, I’m so letting Shayla handle this one. Here’s her first impression: “God, she’d barely been able to breathe when she’d first laid eyes on him. He was the most fascinating man she had ever seen. The vibrant deep green of his eyes was surreal. Dim lighting seemed to reflect out of them and, like an animal’s eyes, they glowed and flashed. His amazing mane of bronze hair hung down over his shoulders, and a braid with green, red, blue and clear stones tied back the hair on one side of his head, revealing the incredible angularity of his masculine face. His brow was strong, pronounced, and his cheekbones were high and sharp. His square jaw framed a mouth so full and expressive her own mouth filled with saliva at the thought of getting to taste him.”

5. What kind of childhood did he have?

Kael has always lived the life of a warrior and a leader to his people. That’s all he knows, all he remembers.

6. What does Kael do for a living?

Kael is one of the seven remaining vampire kings in the world. He is the leader of his people and one of a small but powerful band of warriors fighting the evil Soul Eaters, addicted vampires that steal human souls by draining their victims’ bodies of blood, then eating their hearts.

7. How does Kael deal with conflict and change?

Kael is stubborn and proud, often using his duties to his people and the war as a reason to deny himself. But he’s also a man who once gave his heart over to love, and lost it in a tragic attack on the castle centuries before. Together, all of this makes him resist change.

8. What special powers does Kael have?

Kael possesses vampiric speed and strength, the ability to mesmerize or charm, superior sight, hearing and smell, and telepathy under certain circumstances.

9. Does Kael have a romantic interest in anyone?

Kael feels taunted by his desire for Shayla McKinnon, one of the human Proffered put forward to service the needs of the vampire elite. He’d rather starve than have to make use of these young women, but he requires the blood of either a mate or a human virgin to maintain his immortality and his humanity. Shayla surprises him and overwhelms him, making him want things he thought he’d never want again.

10. Will we get to see Kael in any of the other books in the series?

It’s possible! So far, there are two stories in the Vampire Warrior Kings series, with more on the way. As the war against the Soul Eaters escalates, there’s more and more chance the remaining kings will come together to fight the Big Bad!
So, I hope you enjoyed this sneak peek into In the Service of the King’s warrior hero, Kael McQuillan. Please leave a question for Kael or his author lady—we’d both be glad to tell you more!
Thanks for reading!
Laura Kaye & Kael MacQuillan
Buy Laura's Books
Website | Blog | Facebook | Twitter | Newsletter SignUp
GIVEAWAY!
To celebrate her new release, Laura is giving away one e-copy of In the Service of the King at each stop on her New Release Tour, 1/30 – 2/15! In addition, all commenters from across the tour will be entered to win a prize bag filled with swag and various vampire items, perfect for the vampire lover!
RULES: Must leave e-mail address and if from U.S. in comment. Ebook prizes open to international; prize bag to U.S. only. Giveaway on this blog for the ebook will end on Feb. 6
About In the Service of the Kings
Book 1 in the Vampire Warrior Kings Series
Harlequin Nocturne Cravings

Kael, Warrior King of the Vampires, loathes the Night of the Proffering. He needs the blood of either his mate or a human virgin to maintain his strength, but hasn't enjoyed the ritual since he lost his mate centuries ago. Kael doesn't want a new companion, yet his resolve is tested when he lays eyes on his new offering, Shayla McKinnon. He is drawn to Shayla's beauty and poise...and the submission she offers. She is eager to give him anything he wishes, including her innocence, to please him. Will Kael give in to their overwhelming desire--even if it means risking Shayla's life?

Voted Breakout Author of the Year in the 2011 GraveTells Readers’ Choice Awards, Laura is the bestselling and award-winning author of a half-dozen books. Hearts in Darkness is a finalist for the EPIC eBook Award for Best Novella, Forever Freed won the NJRW Golden Leaf Award for Best Paranormal of 2011, and North of Need, the first book in the Hearts of the Anemoi series, was named GraveTells’ Best Book of 2011 and won their 5-STAR Gold Heart Award, and won Sizzling Hot Read of the Year at Sizzling Hot Books. Laura lives in Maryland with her husband, two daughters, and cute-but-bad dog, and appreciates her view of the Chesapeake Bay every day.
Posted by Melissa (Books and Things) at 12:00 AM