The description of the toys from the Kyjen site:


Introducing a new toy that occupies and challenges dogs’ cognitive skills. These toys provide enrichment (described below) for your own dogs. As descendants of wolves, most dogs instinctively enjoy the challenge of hunting and seeking out the hidden food in our Puzzle Toys. It keeps your pets healthy, happy and engaged! All games include instructions and tips.

Enrichment Programs These programs have been implemented in zoos throughout the world. Among the methods used to create stimulating environments are food puzzles that encourage animals to investigate and interact with their surroundings. These puzzles allow them to forage for food in ways that come naturally in the wild. This keeps them actively engaged in their zoo-based environments. 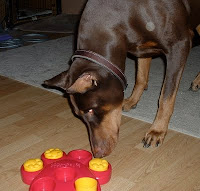 This is one of 3 different types of puzzle toys by Kyjen I chose to review, mostly because I was curious as to how my dogs would respond. I've done the buster cube (which dispenses treats when rolled across a floor... it's quite noisy). I thought that my malamute would take on this challenge and conquer it in no time. I mean she has opened drawers and gotten into areas which I thought was safe from prying paws. However, she didn't see it as a challenge and ignored the toy. I'm guessing it is because it wasn't at all forbidden. I might have to think about that. 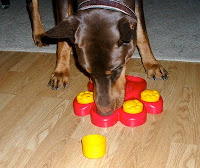 However, my doberman and my mom's sheltie were extremely interested in the toy. Plus it was quite fun watching them try to figure it out. Even trying to convince me to go over and open it up for them. Heh... little snots. ;) Anyway... my doberman only took a few tries and got it out... even flipping one of the cups upsidedown into another empty space (thought that was a neat trick.. lol). He doesn't have it mastered and I picked it up before he does. Instead of wanting to see how fast he does it, I want to preserve the mystery as long as I can so he can continue to think instead of easily open it. I consider this toy a success. As for my mom's sheltie... she hasn't gotten it yet, but she will. Right now she has a tumor (benign) on one side of her mouth that will be removed so she needed help in getting it, but I have no reservations that she will be a pro once she can fully use her mouth on that toy. 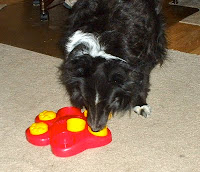 My only warning is for those in multi-dog homes. You might consider doing this on an individual basis. The malamute and the doberman, both became a bit possessive of the toy. I recognized the body language and picked it up so no fight would happen. My warning should apply even if they are friendly to each other. The doberman and malamute often eat in close proximity of each other. They exchange treats and toys and don't fight at all. So, I was surprised when this happened. I think it is because it is a hidden treat they both know was there and couldn't divide it up in the normal way. Also, if you have a chewer like I do, never leave it unattended.

Edit:
My doberman asked for the toy soon after I wrote out this review. I gave it to him and he mastered it in a few minutes (there goes the mystery... lol). At one time he took out a cup and moved away from the toy to play with the cup. The exposed treat was left unattended, so the sheltie went over and ate it. He did this one more time while I laughed. I take it back... the doberman is not the master... the sheltie is! I mean, she didn't even have to work for it and I think he is now her minion. lol

You can buy this as well as 2 other type of puzzle toys at Kyjen, Amazon

and most places where they sell dog toys. I also found it discounted (w/free shipping in the US) here: 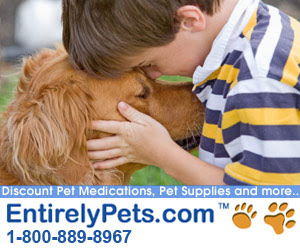 I received this dog toy from Kyjen as part of their dog toy testing and review program and was not compensated for my review in any way.
Posted by Melissa (Books and Things) at 5:00 AM

Email ThisBlogThis!Share to TwitterShare to FacebookShare to Pinterest
Tag! You're it!: dog, dog product review