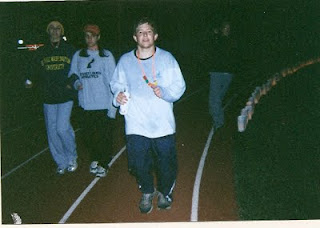 Setting Impossible Goals
By Bryan Cohen
The above picture is a snapshot of me during my senior year of high school at our local Relay for Life event sponsored by the American Cancer Society. I am drenched in sweat because of a foolhardy and ambitious attempt to jog/walk 49 miles in one day.

This strange and seemingly impossible goal came on a whim. Those plastic beads around my neck in the picture are tiny-colored feet. We received one after each mile we travelled which was equal to four times around our quarter-mile track. After I was a few hours into the 24 hour event, I had travelled nine miles, since all I had done there was walk or jog the track since I’d arrived. I had seven orange feet and two green feet. I asked the plastic foot dispensing booth how many colors they had. The attendant said they had seven. For no discernible reason, I decided I wanted seven feet for all seven colors or 49 miles in total.

I was athletic at the time, but I certainly wasn’t a marathoner. I’d never even heard of anyone I knew running more than 10 miles at a time. This seemed like a truly impossible and crazy goal. So, I went for it.

When I told my high school peers what I wanted to do, they immediately wanted to help. When you set a huge goal and tell the right people about it, it’s amazing how much help you can obtain. People I barely knew volunteered to ice my feet or jog a lap with me. I even jogged a mile with my brother Jamie while holding a boom box that was blaring Pink Floyd’s “Dark Side of the Moon” (don’t let either the presence of a boom box or Pink Floyd fool you, this was definitely in the year 2001).

Roadblocks occur in the midst of every worthwhile goal and mine was major to my high school mind. My girlfriend of seven months told me about 20 miles into my quest that she didn’t want to keep dating after I went to college. For a nerd like me, who had only had one girlfriend previous to this, the news was devastating. Tired, heartbroken and aching, I pressed on in my goal. Just because something knocks you off track during your attempt for intense achievement, does not mean you should give up. When asked what he would do if the Confederate Army looked to be winning the Civil War, President Abraham Lincoln said, “Oh, there’s no choice but to keep pegging away.”

I did not reach 49 miles by the end of the event. By 35 miles, my legs had cramped up too much and each step sent overwhelming through my feet and calves. I called it a day. 35 miles was a huge achievement nevertheless and it reminds me of the Ralph Waldo Emerson quote, “Shoot for the heavens and you’ll end up among the stars.”

When writing you should set audacious goals. You will feel a drive like never before. People will come out of the woodwork to help you reach the finish line. There will be related and non-related setbacks. Press on as hard as you can and see where you end up.

Bryan Cohen is a writer, actor and comedian from Dresher, Pennsylvania. Since graduating from the University of North Carolina at Chapel Hill he has written four books (1,000 Creative Writing Prompts: Ideas for Blogs, Scripts, Stories and More, 500 Writing Prompts for Kids: First Grade through Fifth Grade, Sharpening the Pencil: Essays on Writing, Motivation, and Enjoying your Life, and Writer on the Side: How to Write Your Book Around Your 9 to 5 Job), several plays (Something from Nothing and Chekhov Kegstand: A Dorm Room Dramedy in Two Acts) and he was the head writer for an un-produced Web series (Covenant Coffee). His writing and motivation website Build Creative Writing Ideas has had over 100,000 visitors since it was founded in December 2008. He lives in Chicago, Illinois.


Giveaway!
Bryan Cohen is giving away 100 personalized writing prompts to one giveaway entrant chosen at random during the blog tour. Personalized prompts are story starters that cater specifically to a writer’s subject matter, strengths/weaknesses, etc. Cohen will create the prompts to cater exclusively to the winner. He is giving away free digital copies of his book The Writing Sampler to everybody who enters, which includes excerpts from each of his four books on writing. The book contains essays, writing prompts and tips and tricks to enhance your writing skills. In addition, for each of Cohen’s books that reach the Top 500 on Amazon during his blog tour, he will add a $50 Amazon gift card to the drawing (up to six $50 cards in total)!

To enter, simply post a comment to this blog post with your e-mail address. Entries will be counted through June 2nd, 2011.
Posted by Melissa (Books and Things) at 12:00 AM