of Bees and Mist by Erick Setiawan Blog Tour 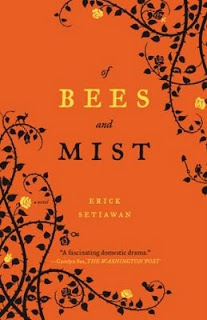 
Of Bees and Mist is an engrossing fable that chronicles three generations of women under one family tree and places them in a mythical town where spirits and spells, witchcraft and demons, and prophets and clairvoyance are an everyday reality.

Meridia grows up in a lonely home until she falls in love with Daniel at age sixteen. Soon, they marry, and Meridia can finally escape to live with her charming husband’s family—unaware that they harbor dark mysteries of their own. As Meridia struggles to embrace her life as a young bride, she discovers long-kept secrets about her own past as well as shocking truths about her new family that push her love, courage, and sanity to the brink.

Erick Setiawan’s astonishing debut is a richly atmospheric and tumultuous ride of hope and heartbreak that is altogether touching, truthful, and memorable.

This book is a bit of a mystery to me. Not in a bad way, but in a very good way. While it is an intriguing story mostly of two women. Meridia who grew up with strange mists and Eva, Meridia's eventual in-law who seems to be able to conjure bees from incessant and nasty speech. However it is mostly Meridia's story we follow. Within her mind we encounter a great many metaphors. This is part of the books magic. Sometimes we, as readers, are unable to tell the real from illusion, magic from metaphor. While in some books this could become quite maddening, actually it becomes more of a lyrical poem. In some ways it was fun for me to see if it was all in Meridia's outlook on life, or if there really was some sort of magic in play. For example, sometimes the other characters would participate within the metaphor and acknowledge it, and other times it seemed as nothing more than an illusion.

This book is also about family, betrayal, forgiveness, making the wrong and right choices, inner-strength, and weakness. Erick Setiawan paints all this with a beautiful flourish. It not only makes it interesting, but emotional as well. I even found Eva interesting. A character that does nothing but manipulate and lie usually does not interest me at all. However, within the prose you find yourself wondering what is going to happen to this character and how many of those characters you have met in your life. In my case, I have known a few. Now, I may silently smile to myself as I see bees fly out of their mouth stinging those around them.

Oh I could go on, but I don't want to spoil anything. I encourage you to try this book. I've given this book 4 stars. Erick writes a story of mostly women very well. Also, examine the book cover if you get a chance. You'll find small objects in within the roses that are within the story. You can examine some of those same pictures at his blog:
http://www.ofbeesandmist.com/
Erick's FaceBook page

Email ThisBlogThis!Share to TwitterShare to FacebookShare to Pinterest
Tag! You're it!: magic