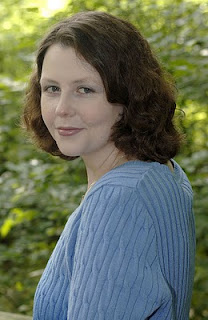 Greetings and salutations! First of all, I want to say thanks to Melissa for having me on the blog today. Thanks, Melissa!

Some of you might know me as the author of the Elemental Assassin urban fantasy series. The books focus on Gin Blanco, an assassin codenamed the Spider who can control the elements of Ice and Stone. When she’s not busy killing people and righting wrongs, Gin runs a barbecue restaurant called the Pork Pit in the fictional southern metropolis of Ashland. The city is also home to giants, dwarves, vampires, and elementals – Air, Fire, Ice, and Stone.

The first two books in the series are Spider’s Bite and Web of Lies. Venom, the third book, came out on Sept. 28. Tangled Threads, the fourth book, will be published in May 2011, while the fifth book (untitled) will be released in October 2011.

I’ve also sold a young adult urban fantasy series called Mythos Academy. The first book is called Touch of Frost and will be out in August 2011. The books focus on Gwen Frost, a Gypsy girl who has the gift of psychometry, or the ability to know an object’s history just by touching it. After a serious freak-out with her magic, Gwen finds herself shipped off to Mythos Academy, a school for the descendents of ancient warriors like Spartans, Valkyries, and more.

So Melissa suggested that I do a post today about the questions that I get asked as an author. I get tons of questions and comments through e-mail, Facebook, and Twitter, everything from requests for bookmarks to tips on writing to when my next book is coming out.

But today, I thought I would focus on some of the most interesting and most unusual things that people have asked me. Here goes:

1) Are your Elemental Assassin books like the movie Fried Green Tomatoes?

Uh, no. Gin does not barbecue and serve up the people that she kills at her restaurant. That would just be icky. You would not believe how many people have asked me this one, and it’s something that I never even thought about while I was writing the books.

2) You look like such a nice girl. How can you write all that sex and violence?

Apparently, I hide my true dark, twisted, evil nature quite well. ;-)
Seriously, though, I like reading books with a little bit of everything in them, including sex and violence, and those are the kind of books that I like writing. Besides, it’s just fun to write about a character who’s as strong and sassy as Gin in. She lives in a violent world, and she gives as good as she gets. Enough said.

3) Why aren’t vampires featured more prominently in your books?

Because there are lots of vampire books out there already, and I wanted to do something a little different. So vampires are a part of my world, but the focus isn’t on them any more than it’s on the dwarves or giants. The focus is on Gin and her elemental magic. But I am thinking about having Gin take on a really nasty vampire bad guy at some point in the series. We’ll see what happens.

4) Are you the woman on the Elemental Assassin book covers?

No, that is not me on the covers. I wish my body was that good! But I get asked this question a lot when I sign books at my local comic book store. I think some of the guys there are hoping that I’ll pull a superhero switcheroo and suddenly go from geeky to hot in five seconds. Sorry, fellas, it’s not going to happen. What you see is what you get. LOL.

Unfortunately, no. I wish that I could kick butt like she does or was just as mentally tough. The truth is that I’m kind of wimpy. I don’t like arguments or confrontations, and I tend to keep my feelings to myself. Heck, I don’t even like killing bugs because I hate the way they crunch under my shoes.
I’m pretty laid back. Live and let live and all that. Be nice to me, and I’ll be nice to you. Treat me like dirt, and I will wish that I could make your head explode with my fiery gaze alone.

I can be ruthless about certain things, though. If you are between me and the last cookie on the plate, then you are in serious trouble. ;-)

You bet your bottom dollar I can! Well, okay, maybe I can’t cook quite as good as Gin does. After all, everything she makes turns out perfect every single time. My dishes don’t always do that. But I think I’m a pretty decent cook. Let’s face it – it’s not that hard to follow a recipe. LOL.

I think the key to being a good cook is to just keep things simple. It’s a lot easier to dress up a cake mix and have it turn out nicely than it is to make something complicated from scratch. I tend to stick to what I call “mix and stir” recipes. A few ingredients you mix together, then bake or refrigerate or whatever. I’m pressed for time like everybody else, so I like simple recipes with common ingredients.

Besides, I think the best food is often the simplest. To me, you just can’t beat things like fried chicken, mashed potatoes, buttermilk biscuits, or chocolate cake. Mmm … I’m getting hungry just typing this …

7) Are the recipes in the books real? They sound so good!

Some of the recipes are real, while others (like Fletcher Lane’s secret barbecue sauce) exist only in my imagination. Most of the recipes are tried and true favorites that I’ve collected over the years from friends, family, magazines, etc. You can find some of them on my website: http://www.jenniferestep.com/books-series/elemental-assassin-series/. Scroll down until you see “Gin’s Recipe Box.” Every once in a while, I swap out the recipes or add new ones.

8) Are you really from the South?

Yep, I’m a Southern girl born and bred. In fact, my hillbilly drawl would probably make you cringe if you heard it. I’ve lived my whole life in the mountains in the South, and I don’t see that ever changing.

9) Do you like barbecue? What are some of your favorite foods?

I love a good barbecue sandwich, although baked beans are my favorite barbecue-related thing. I’ve got a big sweet tooth so I love cookies and cake and ice cream, but I also really like hearty foods, like mac and cheese, French fries, and pasta. Cheese is my real weakness though. I love cheese.

10) Do you have a plan for the Elemental Assassin series? When will Gin get revenge on the person who murdered her family?

I do have a plan for the series. I’m under contract for five books right now, which will let me finish out the big story arc with Gin and her nemesis. Most of the other big questions will be answered as well, like who Gin ends up with.

I know that I hate it when a series goes on forever and nothing seems to happen or change, so I want to give readers a complete story with these five books. Of course, I’d like to write more books in the series beyond these five, but that will depend on sales, like everything else does.

So there you have it. Some of the many questions that I’ve been asked as an author over the years. 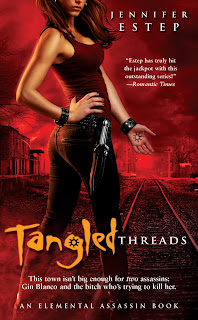 Oh, and those of us who are squeeing at another book in the works... here is a glimpse of the cover for "Tangled Threads".
GIVEAWAY
Because I love this series so much I want to share it with as many people as possible. To enter, answer Jennifer's question, ask a question, or make a comment in the comments section to win. Don't forget to leave an e-mail addy. She'll be here the first day to answer any questions you might have. There will be 3 prizes available.
Just don't forget to let me know which one or one's you would like to enter to win.

Giveaway is now closed.
Posted by Melissa (Books and Things) at 12:00 AM