Beauty and the Clockwork Beast by Nancy Campbell Allen 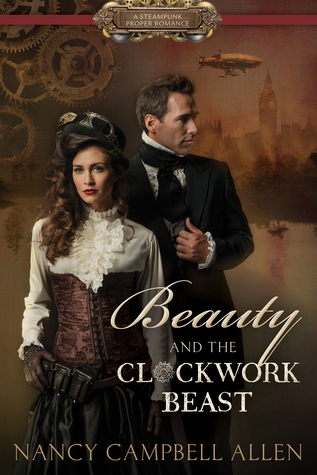 When Lucy Pickett arrives at Blackwell Manor to tend to her ailing cousin, Kate, she finds more than she bargained for. A restless ghost roams the hallways, werewolves have been reported in the area, and vampires lurk across the Scottish border. Lord Miles himself is clearly hiding a secret. He is brash and inhospitable, and does not take kindly to visitors—even one as smart and attractive as Miss Pickett. He is unsettled by the mysterious deaths of his new wife, Clara, and his sister, Marie. Working together, Miles and Lucy attempt to restore peace to Blackwell Manor. But can Lucy solve the mystery of Miles? Can she love the man—beast and all?

Hm... Jane Eyre meets Beauty and the Beast? Um... you know I was so going to get this book for review. And while this is a retelling of Beauty and the Beast, it actually seemed more than that. At first I was reminded of Dracula and The Secret Garden. Later I became more aware of the influence of Jane Eyre and Beauty and the Beast. I actually would say it is more influenced by Jane Eyre, however. Yea, you can safely say this one felt like an homage to the classics with a bit of steampunk thrown in.

Too much? Actually it worked. I enjoyed sussing out what the influence was and at the same time I was enraptured by Lucy who was no shrinking violet. I even loved that when she was overtaken by fear, she didn't let it stop her. She even was Miles's equal... and dare I say may have surpassed him in fortitude. The mystery is also what moved the story along with Lucy who is the one determined to get to the bottom of things. It is through her and a particular ghost with the same attitude as Lucy that we learn everything that we need to figure out what had happened.

The steampunk in this book is light but does have all the necessary gadgets to get us through the book. I would have liked to know a bit more about a couple of the gadgets but that is really more about curiosity on my part and may have slowed down the pace too much for me to learn those things. So, I do not count that as a niggle in my reading.

I give this steampunk murder mystery thriller paranormal retelling *breath* 4 stars. It is fun, twisty and has some great characters to love. I really recommend it to those that enjoy fantasy and steampunk in particular. It reads as a standalone but I also understand that this is the first in a series and I cannot wait to read the next book.
Posted by Melissa (Books and Things) at 12:00 AM