Of Sand and Storm by Amber Argyle 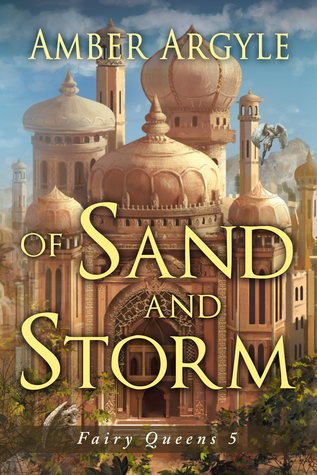 
Book 5 in the Fairy Queens Series.

By law, any child born in Idara is free, even if that child is born in a slave brothel. But as Cinder grows into a beauty that surpasses even that of her mother and grandmother, she realizes that freedom is only a word. There are other words too, stronger words. Words like betrayal and prison and death. And there are words even stronger than those. Words like courage and family and love.

In the end, if Cinder is to escape the fate of her matriarchs, she'll have to fight for her freedom. Because true freedom is never free.

I have enjoyed this whole series but always knew I was missing a book. This one is novella length so I know I was only missing a extra character story within this series. I was glad to finally get to read this one and it was about one of my favorite secondary character in Winter's Heir (the last in the series). She was someone who brought Elice out of her shell and also someone who you knew was strong. It was the seamstress, Cinder who had her own tale to tell.

I was not disappointed in this story. I really enjoyed seeing how Cinder took her situation and made the best out of it. Freeborn, but yet still nothing more than a slave, her captors/employers set forth a scheme to entrap her further. Her grandmother, aunt and mother were all considered slaves and either concubines or servants. All were determined that Cinder would not fall into the same lifestyle.

There is intrigue and romance and while Cinder does not do all of her saving, she does find her way and helps a rebellion and risks everything she holds dear to do what is right. She does become the cunning and hero of her own story, even though she does not do it alone. Plus we get to see the germination of an idea which leads us to the stories to come in the series.

I give this book 4 stars. I really loved how this one was put together but I would have loved it longer. Not that it needed it, but I really liked the character of Cinder and would have liked to have followed on her adventure longer. And while I did read it out of order, it did not take anything away from the story. In fact, I saw further into the arc since I read the books after. This is a good one to read in order, since it does build on the book previous and sets us up for the ones to come. I highly recommend the series to those that enjoy fantasy books with devious fae.

Email ThisBlogThis!Share to TwitterShare to FacebookShare to Pinterest
Tag! You're it!: adventure, Faerie, magic, Romance