The Mermaid's Secret by Katie Schickel 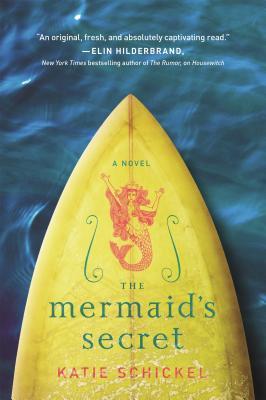 
Life on land is suffocating for Jess Creary, who wastes her summers flipping burgers for tourists on a fishing boat off her quaint resort island home off the coast of Maine. After all, her older sister Kay died in a boating accident two years ago, her mother has disappeared, and her father isn't exactly dealing with things so well. Surfing and the handsome Captain Matthew are about the only bright spots in her life.

Then, on her twenty-third birthday, Jess catches the perfect wave--a wave that transforms her into a mermaid. Under the sea, a startlingly beautiful, dark place, Jess is reborn into a confident, powerful predator with superhuman strength --finally she is someone to be reckoned with. Meanwhile, back on land, Jess's relationship with Captain Matthew heats up, and so does her search for justice for Kay.

Jess has thirty days to choose between land and sea; legs and fins; her humanity and her freedom. Who could ignore the freedom of the sea? Yet, the ocean is a dark, wild, lonely place. Is this a gift or a curse? Will Jess choose family and love, forgiveness and truth, or will she be seduced by the wild call of the sparkling sea forever?

Okay, I'm a mermaid fan. I admit it. So, when this book found it's way into my hands, I knew I was going to read it. Not all mermaid books have been a success for me, but it is still a mythological creature we have stayed in the shallows and not gone much into the deep end (see what I did there? I crack myself up sometimes...). Yea, I still want more books with this mythos and this one had a paranormal, chick lit, magical realism vibe to it.

This was mostly about a family who endured a tragedy and how they all dealt with the death of Jess's sister. Her father became overprotective, her mother took off, and Jess refused to reach for her future and become less of herself. This is more of Jess's journey and for a relatively short novel, it does a pretty good job of it.

There were times when Jess annoyed me. She was a bit on the whiney side and was too easily overcome by anger. It made sense but at the same time you still wanted her to wake up and stop hurting herself more than the person she accuses of her sister's death. It might have been easier to deal with if we had spent more time with her and knew the girl she was before the tragedy but honestly it was a minor niggle that wasn't that hard to swallow. She does grow in the end and there is also a romance brewing in the background that helps with her transformation. I think it was the acceptance of those around her that led to her biggest growth.

I give this book 4 stars. While it isn't the best mermaid story out there, those that like chick lit and magical realism might like this twist in the storyline. I wanted to know more about some of the secondary characters but in the end was satisfied with what I got in this book.
Posted by Melissa (Books and Things) at 12:00 AM