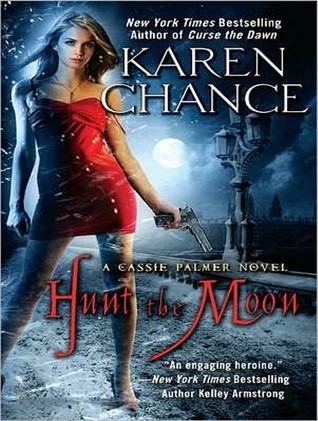 
Cassandra Palmer recently defeated a god, which you'd think would buy a girl a little time off. But it doesn't work that way when your job description is Pythia-the world's chief clairvoyant. Cassie is busier than ever, trying to learn about her power, preparing for her upcoming coronation, and figuring out her relationship with the enigmatic sexy master vampire, Mircea.

But someone doesn't want Cassie to become Pythia, and is willing to go to any lengths to make sure the coronation ceremony never happens- including attacking her mother before Cassie is even born.

This was a long audio, but since I've had Cynthia Holloway read the last book to me, I knew I would enjoy it. I like her character voices and how she creates a nuance and inflection in their voices.

In this book we learn quite a bit about Cassie's lineage and past. We also learn more about Pritkin and Mircea. We come to find out what past incidences colored the way they see things now. There is a chance for growth in all characters, but we see it the most in Cassie.

This book was also filled with action. Almost too much for me. I felt like I ran a marathon after this book. I wouldn't know how Cassie would have remained sane with one thing happening after another. However, our heroine is sometimes outmatched but she never gives up. It is her tenacity that sees her through... along with some heavy hitter paranormal friends.

I do think I enjoyed most of my running stay with Cassie, especially learning and having a much deeper understanding of the main characters. The ending, however, is not my favorite. While it wasn't the worst cliffie I've had, it was a cliffie nonetheless. :p No! After 14 hrs and you do that to me! It really is more of an introduction to an added arc (I suspect) than not answering lingering questions in this book, but I still hated it. And yes, cannot wait to get to the next book as well. Darn it. :)

I give this book 4 stars. It is a fast paced book that gives you no time to rest. Oh and those looking for some hot action, you will not be disappointed here. Yea, she had a little time to enjoy herself more than once. *waggles eyebrows* I recommend this series to those that love UF.
Posted by Melissa (Books and Things) at 12:00 AM