On My Wishlist: Snared by Jennifer Estep

Oooh it's been a  Elemental Assassin summer... and that is so good!

However, winter is coming and this is what we will have this winter: 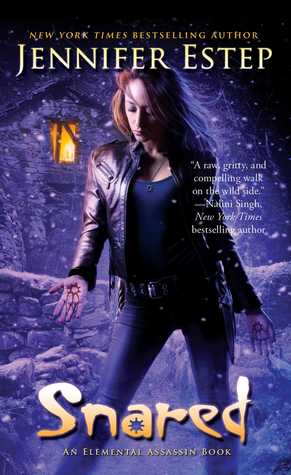 Another week, another few clues trickling in about the Circle, the mysterious group that supposedly runs the city’s underworld. Gathering intel on my hidden enemies is a painstaking process, but a more immediate mystery has popped up on my radar: a missing girl.

My search for the girl begins on the mean streets of Ashland, but with all the killers and crooks in this city, I’m not holding out much hope that she’s still alive.

A series of clues leads me down an increasingly dark, dangerous path, and I realize that the missing girl is really just the first thread in this web of evil. As an assassin, I’m used to facing down the worst of the worst, but nothing prepares me for this new, terrifying enemy—one who strikes from the shadows and is determined to make me the next victim.

I know this is quite early but Jennifer Estep shared the cover and I couldn't resist!

What is on your cold weather wishlist?
Posted by Melissa (Books and Things) at 12:00 AM