Audiobook Review with Crafts!: A Sorceress of His Own by Dianne Duvall 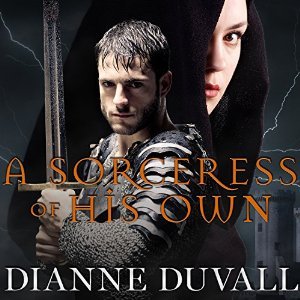 
Since the day Lord Dillon earned his spurs, rumors of his savagery on the battlefield have preceded him into every room, stilling tongues and sparking fear. Weary of battle, he wishes only to find a woman he can wed who will approach him not with fear, but with the tenderness that has been absent from his life for so long. Yet only the wisewoman seems invariably at ease in his presence. Perhaps because she garners the same fear in others that he does himself.

For seven years, Alyssa has been by Lord Dillon's side, counseling him from the shadows, healing him with her hands, and staving off the worst of his loneliness while his fearsome reputation keeps others at bay. Blessed--or cursed--with gifts that label her a sorceress, she is forced to conceal her youth and the love she harbors for him beneath umbral robes that lead Dillon and his people to believe she is the same aged wisewoman who served his father.

All is revealed, however, and passions flare when an enemy threatens Dillon's life and Alyssa sacrifices everything to save him. When Dillon discovers that the wisewoman is far from elderly, he is instantly entranced. And, as he and Alyssa work together to defeat an enemy bent on destroying them both, Dillon will risk anything--even the wrath of his king--to be with her.

I'm a fan of Dianne's other series, Immortal Guardians, so I had to pick this one up. It is an offshoot, a prequel series in a way to the Immortal Guardians which takes place in 1198. We do see Seth and Roland from the other series make an appearance so that made it a nice bridge between the two series. I also loved the way things slowly developed between the two and how both characters grew within each other's love. Not just one character had some self-esteem issues but both and the way they handled it made me smile. Alyssa is wise but yet naive, Dillon is forceful and yet vulnerable. I really liked how this played out between the two characters.

There is not just romance within the book. As with the other series, there is war and someone trying to get the better of our heroes. You get several action scenes so you are not left wanting in that area. I enjoyed the ending and like how things evolved. In one way the answer was too easy, in another way it made sense. I think I was satisfied in how it wrapped up and so I'm looking forward to listening to the next book.

Kirsten Potter did an excellent job of narrating the book. Her voicing of the different characters were well done and she also did a good job of being the crone as well as the young woman with Alyssa's character. She really brought the scenes to life. I also didn't mind her male voices at all.

I give this audio 4 stars. I enjoyed this world and can't wait to see more crossover as the series continues. I love getting little easter eggs in stories like this and really look for them. I recommend it to those that love PNR with a fantasy edge.


And this is what I made while listening to the audio:

Teardrop Sling Bag
pattern by RlR creations
Embroidery design by UrbanThreads
It features a flap pocket on one side, a pocket on the middle/narrow edge (I overlapped the design on the edge so it would be more hidden) and two pockets on the inside (same fabric on inside). The zipper pull was from my own stash. I didn't have a program to help me place the embroidery so there was a lot of nail biting...
Posted by Melissa (Books and Things) at 12:00 AM

Email ThisBlogThis!Share to TwitterShare to FacebookShare to Pinterest
Tag! You're it!: adult, audio, fantasy, library, magic