The Gifted Dead by Jenna Black 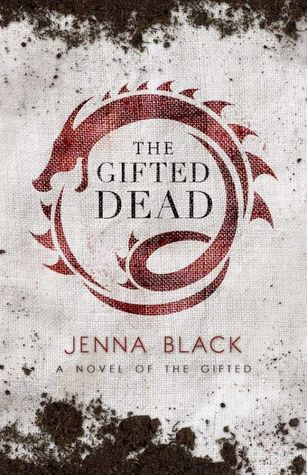 Deep within the Order, the seeds of corruption have taken root. While younger generations of the Gifted have embraced modern democratic values, a secret society of old-guard zealots seek a return to the past, when only European men of distinguished bloodlines held power.

Now, three venerable European families and a maverick American each plot to seize control of the Order and shape it to their will. A cutthroat game of political intrigue will decide the winner; and the stakes couldn't be higher, for ruling the Order carries with it the power to grant—or deny—an afterlife.
What begins as a battle of wills could turn into an all-out war. And magic could prove deadlier than any missile.

I admit that one of the reasons I wanted to read this book is the cover. Jenny of Seedlings (and Supernatural Snark) first brought this to my attention because she designed the cover. I was intrigued by the cover and the blurb. The cover really is connected well to the story and you will see why once you read it. The second reason is the author Jenna Black. I have enjoyed her past books and so I was looking forward to this book.

I admit that sometimes fantasy is quite slow to me. These books often deal with political strife which takes me a bit longer to really get enveloped into the story. However once the players are finally set and we know who is ambitious, ruthless, kind and sincere the story usually takes off for me. It was the same in this book as well. It took me a while to become totally invested, but once I was I didn't want the story to end.

My biggest complaint for the book was the multi-POVs within the storyline. It took me a minute to figure out who was who and keep it straight in my head. However, all the information is necessary and I found later that I enjoyed having more than one POV. All the players are important and I liked getting inside each head. I also had a time figuring out the world in this one.

I give this book 3 1/2 stars. I recommend this book to those that like political fantasy set in an interesting world of magic.
Posted by Melissa (Books and Things) at 12:00 AM