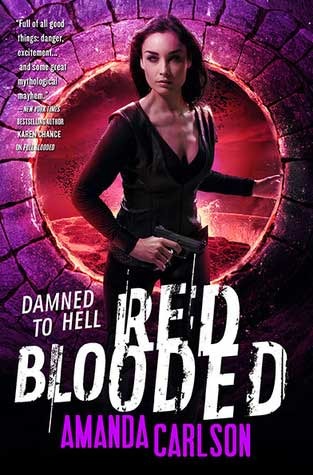 
Jessica is on her way to Hell. After settling a fragile truce between the vampires, werewolves and witches, the last thing Jessica wants to do is face the demons head on. But when the Prince of Hell kidnapped her brother, he set into motion a chain of events that even Jessica doesn't have the power to stop.

Now, Jessica must go into battle again. But Hell is a whole new beast... new rules, more dangerous demons, and an entirely foreign realm. And when Jessica is dropped into the Underworld too soon, without protection or the help of her friends, she must figure out just how powerful she can be... or she will never make it out alive.

My thoughts:
This book had everything I do enjoy in a UF. It had plenty of action and a seemingly impossible task. While I did enjoy the plot I had some problem with the execution with this book. To me it seemed that there was action for action's sake and not to move the story line. It just felt forced to me and didn't quite flow as well as the other books. As with the others in the series I wish that the book would end at least one chapter sooner. While this sounds strange to some it is like starting another book that just stops. I'd rather have a solid ending than a cliffie.

Okay having said all that you would think I didn't like this book at all. Not true. What really saved this book for me are the characters. I do enjoy all the characters and what will keep me going in this series is finding out more about them. Selene, who was the big baddie in previous installments, has made a reappearance and I'm curious to see how that turns out.

I give this installment to the Jessica McClain series 3 stars. I didn't enjoy this one as I did the previous books but I still look forward to reading the next in the series. I recommend the series to those that enjoy UF.
Posted by Melissa (Books and Things) at 12:00 AM

Email ThisBlogThis!Share to TwitterShare to FacebookShare to Pinterest
Tag! You're it!: demon, magic, Vampire, werewolf