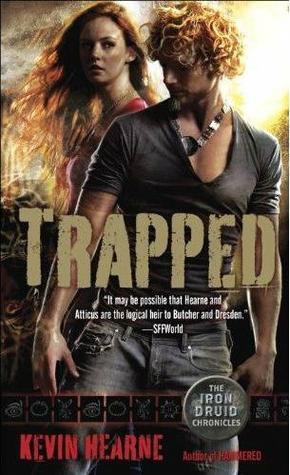 
After twelve years of secret training, Atticus O’Sullivan is finally ready to bind his apprentice, Granuaile, to the earth and double the number of Druids in the world. But on the eve of the ritual, the world that thought he was dead abruptly discovers that he’s still alive, and they would much rather he return to the grave.

Having no other choice, Atticus, his trusted Irish wolfhound, Oberon, and Granuaile travel to the base of Mount Olympus, where the Roman god Bacchus is anxious to take his sworn revenge—but he’ll have to get in line behind an ancient vampire, a band of dark elves, and an old god of mischief, who all seem to have KILL THE DRUID at the top of their to-do lists.

I still love this series but this one actually becomes a bit slow even with all the fighting going on. It seems that our druid and some of the fae tend to go off on story tangents even when faced with insurmountable odds. While I do like the stories and this world's take on the legends, the stories here were constant and actually got in the way of the main storyline. Still enjoyed the characters in the book and Oberon was, as always, a great comedy break. Still, it lacked the cohesiveness of the other stories.

As a side note: my doberman's biggest complaint is that Oberon never got to tell the story of Jean Claude Van Ham. He was quite put out that Atticus stopped him from telling that tale. Just had to throw that in there. :)

I did like that some issues that had be going on have been solved in this book! That was a major plus and now I hope the story starts to get back on track. Luke Daniels still rocks the series and I hope he voices these books until the end. Yep, going to have to get that next book and catch up with this series. I recommend the series to those that enjoy UF, but understand that this book goes a bit off track but yet the information is important to the rest of the series.

Bloggy PS:
I'm at the Geeky Book Blogger discussing my love of libraries!
Posted by Melissa (Books and Things) at 12:00 AM

Email ThisBlogThis!Share to TwitterShare to FacebookShare to Pinterest
Tag! You're it!: adult, adventure, magic