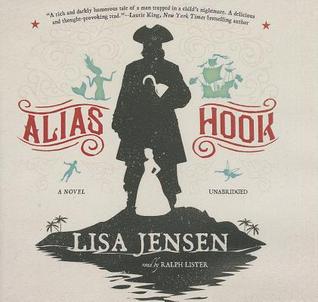 
Every child knows how the story ends. The wicked pirate captain is flung overboard, caught in the jaws of the monster crocodile who drags him down to a watery grave. But it was not yet my time to die. It s my fate to be trapped here forever, in a nightmare of childhood fancy, with that infernal, eternal boy.

Meet Captain James Benjamin Hook, a witty, educated Restoration-era privateer cursed to play villain to a pack of malicious little boys in a pointless war that never ends. But everything changes when Stella Parrish, a forbidden grown woman, dreams her way to the Neverland in defiance of Pan s rules. From the glamour of the Fairy Revels to the secret ceremonies of the First Tribes to the mysterious underwater temple beneath the Mermaid Lagoon, the magical forces of the Neverland open up for Stella as they never have for Hook. And in the pirate captain himself, she begins to see someone far more complex than the storybook villain.

With Stella s knowledge of folk and fairy tales, she might be Hook s last chance for redemption and release if they can break his curse before Pan and his warrior boys hunt her down and drag Hook back to their never-ending game.

My thoughts:
I love retellings and I've been enjoying the Peter Pan retellings I have come across. So when I saw Alias Hook, I knew I needed to get this book. When it was available on audio, I jumped at the chance to review it.

Ralph Lister is the narrator of this tale. I really enjoyed his English accent which was perfect for hook. I always have problems with men voicing women or even children in an audiobook. I did here at first as well, but by the middle of the book I had no problems at all. This book was mainly about Hook so most of the thoughts and dialog was his. The only problem I had was when he voiced the Native Americans in the story. It was like those parodies in old movies and in the Disney version of Pan with the halting speech. I don't fault Mr. Lister for this problem because I do think it was written this way. It may not bother other people as it does me, however.

At the beginning of the story we would move a bit in the "present" and then have reminisces of Hook's early years when he was a boy and a young man. I did like this and I didn't. I liked to know more about this character but I knew the meat of the story lie with Stella who has just appeared in the Never. I so wanted to get on with that part of the story but I also knew that his early years sets our character up for his ultimate adventure. The adventure is about growth and Hook finds that just being an adult doesn't make him grown up. Being an adult is much more than age.

Stella, Hooks counterpoint, was also a great character. She was intelligent and brave. She, in fact, seemed miles ahead of Hook in terms of being grown up. It is her guidance that allows Hook to finally have an honest look at himself and how he, in fact, keeps playing victim to Pan's game.

I give this book 3 1/2 stars. I really enjoyed this book on audio and would love to listen to more by this narrator and read/listen to more by this author. I recommend the book to those that like a bit of historical fiction, retelling of Peter Pan, and growing up without losing your silliness.
Posted by Melissa (Books and Things) at 12:00 AM

Email ThisBlogThis!Share to TwitterShare to FacebookShare to Pinterest
Tag! You're it!: adult, fantasy, retelling, Romance