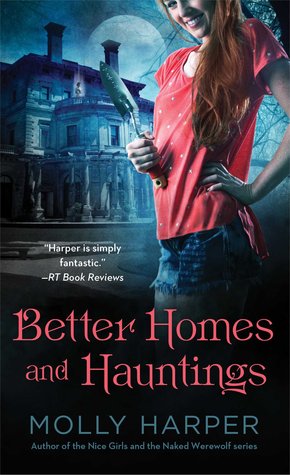 
When Nina Linden is hired to landscape a private island off the New England coast, she sees it as her chance to rebuild her failing business after being cheated by her unscrupulous ex. She never expects that her new client, software mogul Deacon Whitney, would see more in her than just a talented gardener. Deacon has paid top dollar to the crews he’s hired to renovate the desolate Whitney estate—he had to, because the bumps, thumps, and unexplained sightings of ghostly figures in nineteenth-century dress are driving workers away faster than he can say “Boo.”

But Nina shows no signs of being scared away, even as she experiences some unnerving apparitions herself. And as the two of them work closely together to restore the mansion’s faded glory, Deacon realizes that he’s found someone who doesn’t seem to like his fortune more than himself—while Nina may have finally found the one man she can trust with her bruised and battered heart.

But something on the island doesn’t believe in true love…and if Nina and Deacon can’t figure out how to put these angry spirits to rest, their own love doesn’t stand a ghost of a chance.

My thoughts:
This was a cute contemporary ghostie romance. The characters were very likable and you really did cheer for them all to get their HEA. Well, let me say that not ALL the characters were likable but the ones who you weren't supposed to root for do get their karma comeuppance. :)

It does take a bit to really get to know the characters in this story. Still, I have to say that I did like the main characters from the start. As we get more characters introduced to us, I admit that I thought I would be put off by some of them like Dottie and Cindy but you also find how easy it was to get to like them. These are girls that would be fun to hang around. The ghosties were a bit more off putting with the possession and scaring but still there was a mystery to solve as to why they were haunting. While I figured that part out easily, it was still fun to see it played out. You also get your HEA in the end and it is more of a sitcom HEA. I didn't mind and it still made me smile.

I give this book 3 1/2 stars. If you want something just fun with some light romance I recommend this book. It would make for a good summer read.
Posted by Melissa (Books and Things) at 12:00 AM

Email ThisBlogThis!Share to TwitterShare to FacebookShare to Pinterest
Tag! You're it!: adult, contemporary, ghost, Romance