Review and Giveaway: Nobody by Jennifer Lynn Barnes 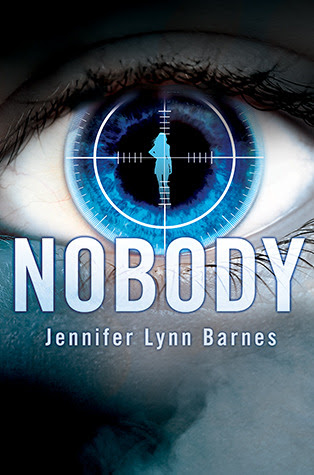 There are people in this world who are Nobody. No one sees them. No one notices them. They live their lives under the radar, forgotten as soon as you turn away.

That’s why they make the perfect assassins.

The Institute finds these people when they’re young and takes them away for training. But an untrained Nobody is a threat to their organization. And threats must be eliminated.

Sixteen-year-old Claire has been invisible her whole life, missed by the Institute’s monitoring. But now they’ve ID’ed her and send seventeen-year-old Nix to remove her. Yet the moment he lays eyes on her, he can’t make the hit. It’s as if Claire and Nix are the only people in the world for each other. And they are—because no one else ever notices them.

This is a book I have no doubt will get mixed reviews. It's a book that in some ways is hard to take and depressing. It's also a book that is uplifting and encouraging. It's very psychological and that is why I think it will be a hit with some and a miss with others.

It does start out quite depressing. We have all had the feeling that no one cares, that we are invisible (or want to be), that we just can't be seen by the people we care the most about. Take that emotion and multiply it by at least 100. That is a Nobody. Someone who cannot be seen, heard, or even remembered. Claire is a Nobody but she hasn't learned it yet. However, with her assassin's help, she is about to find out and find a whole new world open to her.

Now there are 3 different kinds of unusual people in this book besides the "norms". All of it has to do with energy we produce and impress upon another person. Besides the Nobody which was described above, we have the Nulls. These are dangerous people. These are those people who are psychopathic in nature, quite enigmatic, and manipulative to the core. They have no compassion or morals and are quite willing to do what they can to get what they want. This group often includes politicians and serial killers. These are the groups Nix, Claire's assassin, thinks he is only targeting. The other group is sensors. These people have the capability of seeking out Nulls and Nobodies but are susceptible to both. These differences between the types of "other" is important in the book.

Now for the uplifting part. I won't go into the whole story, but I have to say that as depressing as Claire was in the beginning, I felt she was stellar throughout the book. Things that would have crushed the average person did not crush Claire. Sure, she felt unsure and even incapable of doing anything (if you were unable to affect anyone, how much self-esteem would you have?), but she always pressed on using self-made techniques to get her through any situation. She found courage she never had and also helped Nix find who he was and break through his broken-ness. I found this part interesting and enjoyed it. However, you must read a bit more into the book before you get there and the beginning might almost be too depressive to some. You DO get there and really it doesn't take too long.

The story, especially with Nix reminds me of a Buffy, TVS tv show, Out of Mind, Out of Sight. Where the girl was ignored so much she became invisible and the government took her over an made her an assassin. Unlike that story, this one has a romance within the storyline that I think will thrill some. I really enjoyed this romance and even though they were young, it didn't feel like that. In fact, it felt more mature than some YA romances but it makes sense because these characters had to grow up so fast.

I give this book 4 stars. I enjoyed the psychological aspects of the story, but I realize that it may not be for everyone. I recommend it to those that also enjoy these aspects as well as those that like sci-fi flavored romance as well as Ms. Barnes writing. I really enjoyed the way she wrote. I also recommend it to older YA crowds as well as adults. I just think it would fit with them better. However, if a younger person reads it, I think it would be fine. It has some violence in it, but less than most programs.

Media Masters Publicity is giving away a nice prize package:

*The giveaway is one hardcover copy of Nobody and the new paperback release of Every Other Day, which pubs on the same day as Nobody (January 22nd) 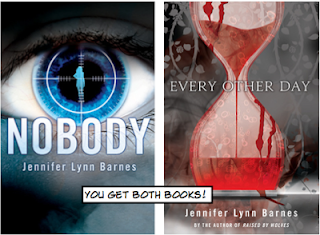 *Media Masters Publicity will ship to the winner.
*US and Canada only please

Can't wait? Get Nobody here:
Barnes and Noble
Amazon
Indiebound
Curious about the other book Every Other Day? This might help:

Okay, want to enter? Just fill out the rafflecopter form below:
a Rafflecopter giveaway
Posted by Melissa (Books and Things) at 12:00 AM

Email ThisBlogThis!Share to TwitterShare to FacebookShare to Pinterest
Tag! You're it!: sci-fi, YA