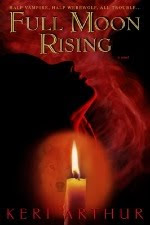 I was looking forward to this series of books by Keri Arthur. The main character is a dhamphire. That is a supernatural person of "mixed" heritage. Specifically, vampire and werewolf. Riley has a twin brother, Rhoan whom shares her secret of her heritage. They were both kicked out of their pack and went to work for a government agency which polices supernatural activity. Both because of the fact they both have vampire blood and also the fact that they hide it, the siblings become targets for other groups looking to further their own business of creating the "perfect" supernatural. All this sounded interesting before I read it so I dove into the book expecting a great adventure. I was disappointed.

Riley, is more wolf than vampire and so is more influenced by the moon's phases and their effect on the werewolves in the book. More like they became slaves to their hormones than anything else. Now, I'm no prude, but the sex in this book actually got in the way of the story. She describes it as sexual freedom, but you have to be free to enjoy the behavior and the werewolves were not free. It was a must. So she kept having to stop the story so her characters could have casual sex. Like I said, it got in the way of the adventure.
Even so, I think since this is a series, I will continue to give this character a chance. Even though there was not much chance for growth in this book, perhaps Riley will have opportunity in the other books. I see a lot of potential. The adventure in this book was well written and if she can control a bit of her hormones, this trek into her dhamphire life could prove to be interesting in the end. I hope I'm not disappointed after this book.
Posted by Melissa (Books and Things) at 1:19 PM

Email ThisBlogThis!Share to TwitterShare to FacebookShare to Pinterest
Tag! You're it!: dhamphire, Vampire, werewolf