Clawed by L. A. Kornetsky 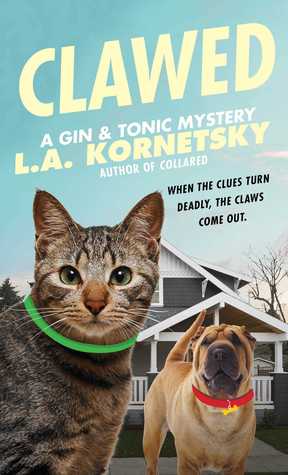 
In this fourth mystery in the charming and witty Gin & Tonic series, private investigators Ginny and Teddy—with the help of their faithful pets—must unravel their most intriguing case yet…

Even though she’s unlicensed as an investigator, the infamously nosy Ginny Mallard and her cohort Teddy Tonica have begun to make a name for themselves in solving cases. But Ginny still has her day job as an event planner, and the promise of a lucrative job draws her to Portland, with her shar-pei puppy, Georgie, in tow. Much to her shock and horror, however, she’s been led there under false pretenses—and discovers a body in the parlor of her client's house!

Though the cops warn her to keep her nose out of it, Ginny just can't resist the itch to solve this case, and soon gets drawn into Portland's seedy underbelly of identity theft, forgery, and of course, murder…with Teddy and his cat Penny's devoted sleuthing helping her at every turn.

My thoughts:
I've only read the book before this one and I think you could pick this one up with no problems as well. You would know there is back story but nothing of such import that you can't follow along. While this one seemed to have less of Georgie and Penny (the dog and cat respectively) but they were still involved enough to lend some humor to the case.

I have to say that this mystery had a lot of twists and turns and I found myself more invested in the people in the story than solving the murder. I was more interested in why Ginny was called down there and then framed for a murder. She was easily cleared but she had to know why she became involved with people she never met. It was an interesting twist in getting Gin and Tonic involved.

I give this book 3 1/2 stars and did enjoy this cozy. I LOVED Penny (the cat) solving the mystery of the stolen tips when none of the humans were any wiser. It really gave the story a push in the humorous direction. I recommend this book to those that enjoy cozy mysteries with a side of dog and cat commentary. :)
Posted by Melissa (Books and Things) at 12:00 AM