The Accidental Empress by Allison Pataki 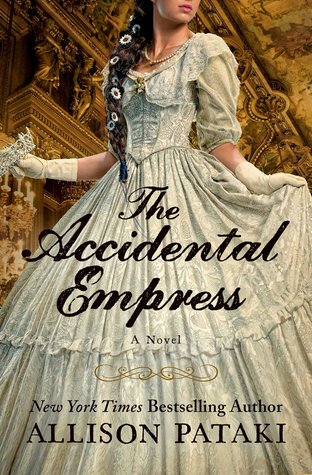 
The year is 1853, and the Habsburgs are Europe’s most powerful ruling family. With his empire stretching from Austria to Russia, from Germany to Italy, Emperor Franz Joseph is young, rich, and ready to marry.

Fifteen-year-old Elisabeth, “Sisi,” Duchess of Bavaria, travels to the Habsburg Court with her older sister, who is betrothed to the young emperor. But shortly after her arrival at court, Sisi finds herself in an unexpected dilemma: she has inadvertently fallen for and won the heart of her sister’s groom. Franz Joseph reneges on his earlier proposal and declares his intention to marry Sisi instead.

Thrust onto the throne of Europe’s most treacherous imperial court, Sisi upsets political and familial loyalties in her quest to win, and keep, the love of her emperor, her people, and of the world.

With Pataki’s rich period detail and cast of complex, bewitching characters, The Accidental Empress offers a captivating glimpse into one of history’s most intriguing royal families, shedding new light on the glittering Hapsburg Empire and its most mesmerizing, most beloved “Fairy Queen.”

While reading this book I became curious as to how close the history was to the real Empress of Austria. What I found by doing a quick search is that the book closely aligns itself to what was reported and what happened. She brings clarity to some aspects of the Empress Sisi's life with reasons that made perfect sense to me. Where some of the details just fantasy? No doubt, but yet it felt like reasonable assumptions.

While I did like Sisi I really didn't like the Emperor's mother Sophia. Ugh. I so wanted to see Sisi throw her out a turret window! I won't say why but when you read it, I have no doubt you would agree. I also didn't care for Franz, the Emperor when it came to being a husband and who still acted as a child when it came to his mother. These parts worked in the book, however, since I don't think we were supposed to praise either one highly.

I give this book 4 stars. I recommend it to those that have an interest in history. This follows her life well and gives potential insight to her behavior and the world this was set.


Bloggy Note:
Don't forget to visit the blog post by Allison Pataki describing how she researched the book! Also there is a great giveaway for $120 gift certificate to the ebook retailer of the winner's choice. Just click HERE to go to the post!
Posted by Melissa (Books and Things) at 12:00 AM

Email ThisBlogThis!Share to TwitterShare to FacebookShare to Pinterest
Tag! You're it!: blog tour, historical, YA