How Democracies Die by Steven Levitsky and Daniel Ziblatt 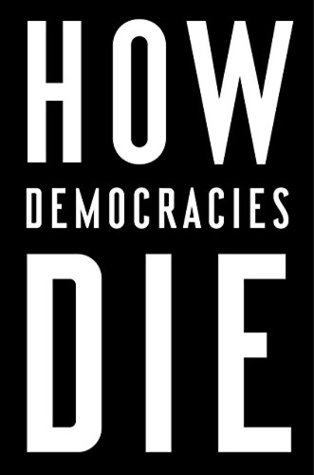 A bracing, revelatory look at the demise of liberal democracies around the world--and a road map for rescuing our own


Donald Trump's presidency has raised a question that many of us never thought we'd be asking: Is our democracy in danger? Harvard professors Steven Levitsky and Daniel Ziblatt have spent more than twenty years studying the breakdown of democracies in Europe and Latin America, and they believe the answer is yes. Democracy no longer ends with a bang--in a revolution or military coup--but with a whimper: the slow, steady weakening of critical institutions, such as the judiciary and the press, and the gradual erosion of long-standing political norms. The good news is that there are several exit ramps on the road to authoritarianism. The bad news is that, by electing Trump, we have already passed the first one.

Drawing on decades of research and a wide range of historical and global examples, from 1930s Europe to contemporary Hungary, Turkey, and Venezuela, to the American South during Jim Crow, Levitsky and Ziblatt show how democracies die--and how ours can be saved.

No matter what you think about US politics right now, I do think there is a resurgence in learning about the political process and what these people in office can and can't do or even what they should or shouldn't do (if not in legal terms). This book does a good job at explaining a bit of that from lessons in the past in terms of what is happening today. Unfortunately I've seen some people dismiss this book without even a cursory read because it does criticize Donald Trump and his rise to becoming the current US president. While it does criticize the man and what he has done, it also brings a historical viewpoint in politics I have not read in quite a while. The book isn't just about Donald Trump even though he is the reason the book was written.

I think the most one word review I've seen about this book is depressing. While that aspect is present in the book, it is also hopeful. We get lessons from democracies that have perished but also those that were threatened and survived and became stronger. The US has had several threatening instances to our democracy and some were successful and corrected in later years which made it stronger and some gone uncorrected or partially corrected which has diminished our democracy. The book also shows what specific ideas were put in place by the founding fathers to prevent demagogues, those who use popular prejudices and false claims, from taking charge. Some ideas were explained in a historical context (ideas that eluded me like the electoral college) as to why they were put in place and also why those ideas failed in recent times. It also delivers a road map in how authoritarian figures come to power by examples of the past and how closely that map is followed in the present. It isn't a one sided book but well rounded as it shows how no one side (liberal or conservative) is immune to the danger of an authoritarian figure. Also, be assured, it shows how the authoritarian figures were subverted either before or after that person came to power.

So while I do see that aspects of this book are depressing I also see hope within the pages. I think it also helps to see that the tiny actions of "no" within the party in power might make a difference if it starts to grow. This book really helped me see that as a bit more positive than I had before (not much but I'll take what I can get). There is so much more I want to say as this book has really made me think. If you want to know a bit more about how democracies win or fail this is the book for you. It is, I think, better than the more tabloid book out there (no names and admittedly I haven't read it because there is nothing to back his claims) as it is a well written and a well documented thesis on how democracies die and also live.

Email ThisBlogThis!Share to TwitterShare to FacebookShare to Pinterest
Tag! You're it!: contemporary, historical, non-fiction, political science