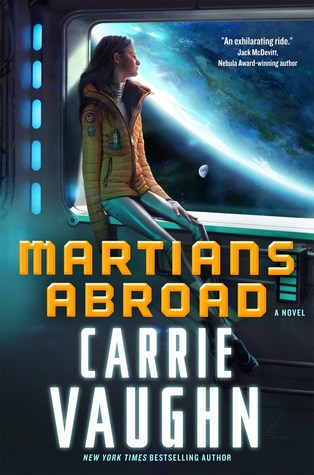 
A great new stand-alone science fiction novel from the author of the Kitty Norville series.

Polly Newton has one single-minded dream, to be a starship pilot and travel the galaxy. Her mother, the director of the Mars Colony, derails Polly's plans when she sends Polly and her genius twin brother, Charles, to Galileo Academy on Earth—the one planet Polly has no desire to visit. Ever.

Homesick and cut off from her desired future, Polly cannot seem to fit into the constraints of life on Earth, unlike Charles, who deftly maneuvers around people and sees through their behavior to their true motives. Strange, unexplained, dangerous coincidences centered on their high-profile classmates begin piling up. Charles may be right—there's more going on than would appear, and the stakes are high. With the help of Charles, Polly is determined to find the truth, no matter the cost.

I do enjoy Carrie Vaughn's work so I was happy when I got this one in the mail. I also enjoy sci-fi so it was a safe bet that this one would be perfect for me. I was not wrong.

Those that do not read much or any sci-fi at all could try this one. It has just enough gadgets to make it interesting but it doesn't overwhelm. Plus, it was an interesting contrast for those that grew up in lower gravities and those that had earth's gravity. It would have been interesting to also contrast with someone who lived on Venus since that gravity is nearly equal to earth's gravity. Just a thought that proves I'm a nerd. 😉 Still, those that do not usually care for this genre could find themselves liking it because of the main character Polly who is smart and brave. Also, the mystery as to what is going on will have you wanting to know more as each problem presents itself.

While I did figure out who was behind what was going on with the siblings, Polly and Charles, I did not figure out why it happened. While there was an explanation given, it didn't feel set in stone but it did feel like it was satisfying. I also enjoyed the dynamic of the various relationships that were formed within this group. My favorite was between Polly and Charles who seem at once distant from each other and close at the same time. Charles mostly lived in his head but it was Polly's knowledge of him from birth which gave him his humanity and spirit.

I give this book 4 stars. It was a fun trip trying to figure out what was going on and enjoying all the worldbuilding within the storyline. I also feel that while the characters are in their teens, this could easily be read by those who are MG and of course, adults as well. I recommend it to those that enjoy sci-fi or want to try it out.


I just wanted to highlight an account that would go with the book...

Follow them in support of science and against the gag order

Email ThisBlogThis!Share to TwitterShare to FacebookShare to Pinterest
Tag! You're it!: adventure, MG, sci-fi, thriller, YA