It Happened one Dooms Day by Laurence MacNaughton 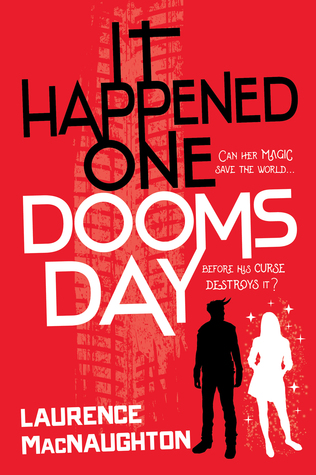 
Can her magic save the world — before his curse destroys it?

Magic is real. Only a handful of natural-born sorcerers can wield its arcane power against demons, foul creatures, and the forces of darkness. These protectors of the powerless are descendants of an elite order. The best magic-users in the world.

Unfortunately, Dru isn’t one of them.

Sure, she’s got a smidge of magical potential. She can use crystals to see enchantments or brew up an occasional potion. And she can research practically anything in the library of dusty leather-bound tomes she keeps stacked in the back of her little store. There, sandwiched between a pawn shop and a 24-hour liquor mart, she sells enough crystals, incense, and magic charms to scrape by. But everything changes the day a handsome mechanic pulls up in a possessed black muscle car, his eyes glowing red.

Just being near Greyson raises Dru’s magical powers to dizzying heights. But he’s been cursed to transform into a demonic creature that could bring about the end of the world.

Then she discovers that the Harbingers, seven fallen sorcerers, want to wipe the planet clean of humans and install themselves as new lords of an unfettered magical realm. And when they unearth the Apocalypse Scroll, the possibility of a fiery cosmic do-over suddenly becomes very real.

There’s only one chance to break Greyson’s curse and save the world from a fiery Doomsday – and it’s about to fall into Dru’s magically inexperienced hands...

Set in Denver, CO and sounded like it had humor in it, I decided to read this one. I have to admit I was not captivated by the cover at first glance, but didn't mind it when I really looked at it. I guess it wasn't eye-catching enough for me personally.

This is a short book, but as I was reading it the characters bothered me. I couldn't put my finger on it until I realized that the characters all seemed a bit juvenile to me. Their attitude spoke to me more of YA characters where you are expected to be not just less confident but are still at the start of learning about themselves. When I sort of made the switch in my brain the book worked better for me, but I admit, it still bothered me somewhat. I suspect that this won't be an issue for most people reading the book but I thought I should mention it since it does affect my star rating.

The book humor didn't give me loud laughs but I did smile. It was a fun and interesting adventure and I did like the characters despite my niggle about their behavior. I really liked Hellbringer, the car (yes, the car) who didn't have much to do in the book overall, but made me very curious as to how sentient the car had become and where the character would go. The group tackles the main adventure and it feels complete. However, this is no simple ending. While I appreciate an arc that was introduced at the end, I did not like the cliffie provided. Ugh... give me some closure in one of the storylines, or at least a bigger hint at the status of one of the characters. Don't want to say more or I'll spoil it.

I give this book 3 stars. It is an entertaining book and a short one. I recommend it to those looking for a fast read full of the 4 horsemen, peril, some romance and some questions at the end.
Posted by Melissa (Books and Things) at 12:00 AM

Email ThisBlogThis!Share to TwitterShare to FacebookShare to Pinterest
Tag! You're it!: adult, demon, magic