Audiobook Review: The Curse of the Tenth Grave by Darynda Jones 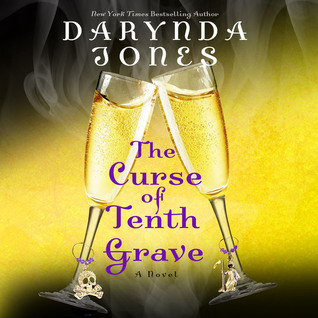 
As a Part-time PI and fulltime grim reaper, Charley Davidson has asked a lot of questions throughout her life: Why can I see dead people? Who is the hot supernatural entity following me? How do I get gum out of my sister’s hair before she wakes up? But, “How do I trap not one malevolent god, but three?” was never among them. Until now. And since those gods are on earth to kill her daughter, she has little choice but to track them down, trap them, and cast them from this dimension.

There’s just one problem. One of the three stole her heart a very long time ago. Can the Razer, a god of absolute death and destruction, change his omniscient spots, or will his allegiances lie with his brothers?

Those are just a few of the questions Charley must answer, and quick. Add to that a homeless girl running for her life, an innocent man who’s been charged with murder, and a pendant made from god glass that has the entire supernatural world in an uproar, and Charley has her hands full. If she can manage to take care of the whole world-destroying-gods thing, we’re saved. If not, well…

Finally got to this one! I wasn't disappointed either. :D I did become worried about Reyes when a lot of people who had read/listened to this one before me was complaining about him being less that forthcoming. I didn't want a stupid misunderstanding to get in the way of this couple (that is usually how it goes). Luckily my fears were unfounded. While there was miscommunication, it was cleared for our couple and for the reader.

Oh so much was clarified! We got to know more details about what is going on and yet there are still more mysteries to be had. I think what I really loved about this one is how much more confident Charley feels to me. She is still learning what she is and who she is because of it, but she really is accepting of those parts as they come and is learning to use her powers. I think I really like this Charley. I cannot wait to see what comes next and I cannot wait to get to know Beep. I have a feeling she will be more than a handful to both parents. :)

I also swear that if Lorelei King stops narrating this series, I might have to read them instead of listening to them. I don't say that often, but she is the voice of Charley and does such an excellent job of the other characters. I think it would be too jarring for me to hear anyone else narrate it. If you haven't tried this one on audio, do try it. I think you'll love it. Might also be the series to get you into audiobooks. :D

I give this book 4 stars and highly recommend it to those that love UF and snarky humor.